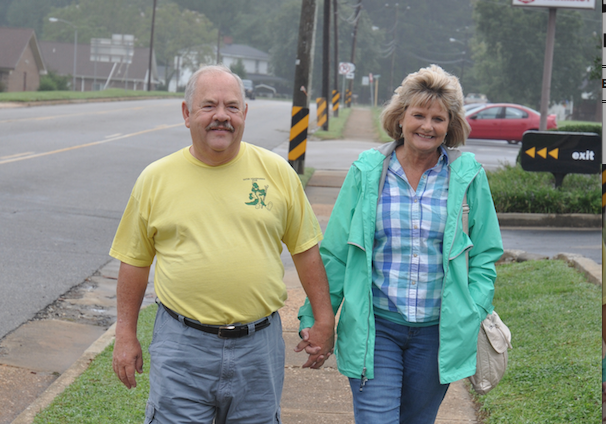 During the Virginia Volkssporting Association’s visit in Keysville on Sept. 2, Don Bradford and Dianne McCroskey begin their walk at the Burger King.

Tollett, of Hampton, became involved. She’s the president of the Virginia Volkssport Association.

“The AVA is our national organization. It’s an international sport,” she explained.

When asked what prompted the VVA to choose Keysville, she replied, “We have county books and city books,” Tollett said, noting that walkers involved seek to walk in every county in every state, along with their cities. “And so we were looking for some place in Charlotte County. …”

According to the AVA’s website, walker’s record books are stamped when the events are completed and “after processing at the association headquarters, achievement awards consisting of a patch, pin and certificate are returned to the participant.”

Tollett has attended more than 4,400 events, and has walked more than 52,000 kilometers, or more than 32,000 miles, across the U.S., Italy, Germany, Switzerland, Belgium, Austria, England, Ireland, Scotland, Canada and more countries around the world.

“Monday, when we’re in Waverly, we will finish up the first round of the books of the counties,” she said, noting the VVA has been working on completing all Virginia counties since 2010. “It’s taken eight years to do this. So, that’s how we have picked these.”

During the interview, Tollett said 19 had registered in the Keysville walk. She said more would walk it the next day.

“There’s some more that should be in. You never know how many. Usually there’s between 40-50 that will do these county walks.”

The walks have proved very special to Don Bradford and his fiancee, Dianne McCroskey.

“I was a runner prior to a sea tour,” said Bradford, who lives in Virginia Beach.

It was on a volkssporting event in Schuyler where Bradford proposed to McCroskey.

“It was Memorial Day and we were at the 2.9-mile mark of our 3.1 walk and I stopped and … got down on one knee and I asked her to marry me, and she said yes,” Bradford said.

WoodmenLife Chapter 179 held a special ceremony in Wylliesburg on Monday to honor the heroes and victims of the Sept.... read more