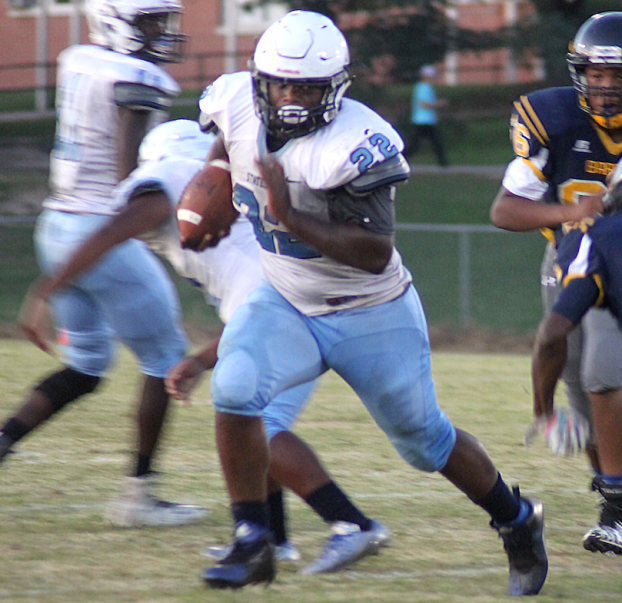 Randolph-Henry High School senior fullback Tyrie Blow-Tydings eludes a tackle attempt by the defense of host Bluestone High School on Friday. Despite the loss, he ran for 276 yards and three touchdowns, and he threw for another score.

Randolph-Henry High School’s (R-H) varsity football team enjoyed its best offensive output of the season Friday night, but host Bluestone High School was able to come away with a 46-28 victory.

“Every game we’ve played so far has been a pretty competitive game at halftime,” Statesmen Head Coach Zach Orlando said. “This game was 14-12 at halftime, and we’re just learning how to play a third quarter, especially. It’s something that takes a while to learn, what winning teams do coming out of halftime, and we haven’t quite learned it yet.”

He noted the first six minutes of the game were difficult ones for his team, but then Randolph-Henry settled down and into a groove, leading to two rushing touchdowns by senior fullback Tyrie Blow-Tydings to help keep up with the Barons’ offensive output.

“Even when we came out from halftime, Bluestone scored on their second play, but we were able to go down and answer, and so it was 21-20 at that point,” Orlando said.

The third Statesmen touchdown came via play in which Blow-Tydings was pitched the ball and he threw to senior tight end Trequan Agnew for the score.

“But then we kick off to Bluestone, and they score in one play,” Orlando said.

He added that the two biggest things his team is struggling with right now include preventing the big offensive play and scoring at the same pace as the other team.

Amid the challenges, Blow-Tydings has been a rock for the Statesmen. He carried the ball more than 40 times Friday, gaining 276 yards and three touchdowns. And when he was pitched the ball to pass it, he went 2-for-2 for about 60 yards and a score.

The Statesmen (0-3) have a bye next week and then host Prince Edward County High School for homecoming on Friday, Sept. 22, at 7 p.m.

In the bye week as he prepares his team for the Eagles, Orlando will be focusing on tackling and finishing out games.

A round of 18 titles

Randolph-Henry High School’s (R-H) incredible tradition of success on the golf course continued this year as its varsity squad has... read more