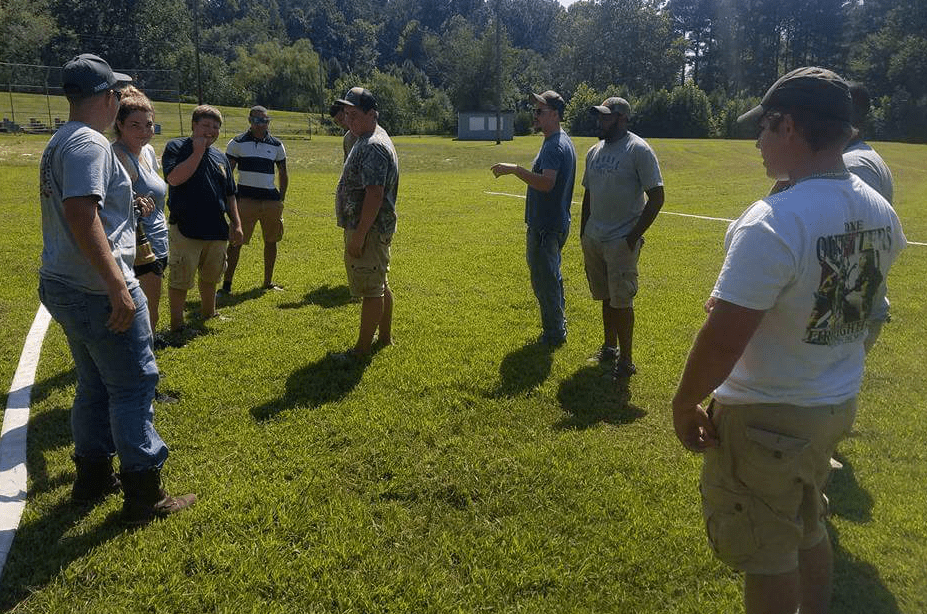 Members of the Drakes Branch Volunteer Fire Department gear up for the Southside Virginia Volunteer Firefighter Association’s 62nd annual convention and competition. Volunteers ready at the ballpark on West Point Stevens Road during a recent practice.

According to Keysville Volunteer Fire Department (KVFD) Chief Lynn Duffey, the event will include a memorial service and parade in addition to the competition.

The parade will kick off at SVCC at 11 a.m. and travel throughout Keysville.

“It’s super nice,” Duffey said. He said Keysville was selected to host the competition based on his serving as president of the SVVFA this past year.

He said each year a new president is chosen and the hosting location is based on the current president who serves the one-year term.

He said KVFD will have a team competing in the competition this year.

According to its website, the SVVFA covers 19 counties throughout Southside Virginia.

Duffey said teams from all over Southside will be present at the event.

The DBVFD will compete in the competition part of the event.

“I’m excited that the Drakes Branch Fire Department chose to participate in the event this year,” said volunteer firefighter Kyree McCargo. “They’re all a great groups of guys and ladies who are all about having fun and showing the community our teamwork.”

While the event will offer friendly competition amongst neighboring departments, sportsmanship plays a large role in the contest.

“The fire service is a noble calling, one which is founded on mutual respect and trust between firefighters and the citizens we serve,” notes the official rules for sportsmanship for the event. “To ensure the integrity of the fire service, the highest standards of ethical conduct must be maintained at all times.”

Officials say the SVVFA has about 70 departments that belong to the organization.

“There will be plenty of people,” said Duffey. He said all activities are open to the public after 11:30 a.m.