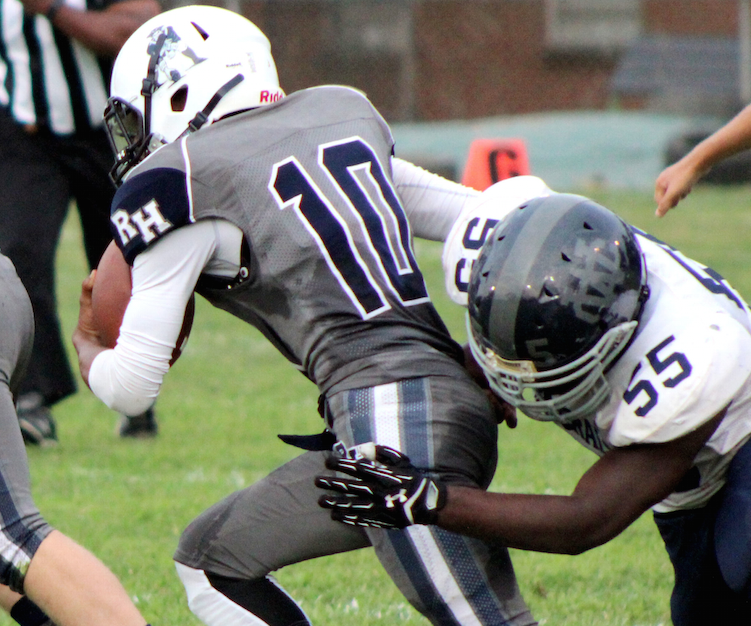 Randolph-Henry High School’s varsity football team challenged visiting William Campbell High School early on Friday, but the Generals pulled away from the Statesmen in the second half for a 61-14 season-opening win.

“I thought the first half we were competitive, and we played hard,” R-H Head Coach Zach Orlando said. “Overall, I think the second half, we kind of rolled over and died a little bit.”

“At one point in the second quarter, it was 18-14, and we had just scored twice in a row, and it seemed like we had a little bit of momentum on our side,” Orlando said. “But we just could never keep the momentum.”

Near the end of the first quarter, Statesmen senior Tyrie Blow-Tydings scored on a halfback dive. Near the beginning of the second quarter, junior Treymon Roberts took a halfback toss from about the seven-yard line and scored. Sophomore Tyrik Beattie ran the ball in for the two-point conversion.

Orlando said his team settled down but was just never able to limit the Generals’ big-play ability.

Blow-Tydings finished the game with 26 carries for 104 yards and a score, and on defense, he led with six tackles and two sacks.

The Statesmen (0-1) host James River High School, of Buchanan, on Thursday at 7 p.m., and Orlando’s goals for his team are simple.

“We could be playing Appomattox, it wouldn’t matter,” he said. “The only thing I’m worried about is I want to see us put a whole game together and not just a half. I want to see our guys make special teams a priority, because this is a three-phase game, and they scored (two) touchdowns on us in that one phase of the game. I want to see our defense, when they get into a good position, to get off the field.”