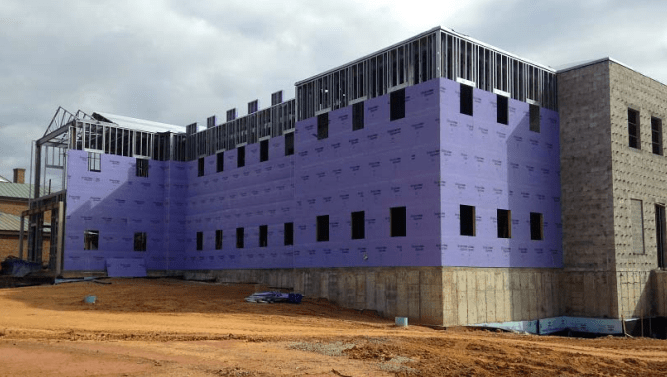 The $13.9 million new courthouse in Charlotte County has seen much progress over the last several months. Project leaders say in the next several weeks, windows could be installed, along with bricks being mortared on the exterior walls of the massive building.

The landscape of Charlotte Court House continues to change as contractors work to construct a new $13.9 million courthouse behind the existing clerk’s office.

“(The project) is on schedule based on the schedule we have,” said Tim Burge, project superintendent for Skanska, the firm managing the project. “There’s a lot going on right now though.”

According to Burge, in the last several weeks, “we’ve got all the floors poured in the building. The ground floor and upper floor are pretty much framed out. Exterior walls are framed. They are getting ready to put the roof on. They’ve been installing the roof installation.”

The roof will be metal, Burge noted.

As to what those traveling through the area should expect to see in the coming weeks, Burge cited “seeing the windows installed, possibly the brick starting. They may do some curb and gutter trying to get the site ready,” he said. “That’s kind of what will be going on in the next month or so.”

Bricks could start going up in late September, he said.

The courthouse is set to be complete in December.

“We haven’t run into hardly any change orders. If they are they’ve been very minimal,” Burge said.”

Supervisors hired Skanska USA in March for $260,000 to oversee the project. Blair Construction is the project’s general contractor.

The vehicular entrance and exit to the complex will be one way, per the Virginia Department of Transportation.