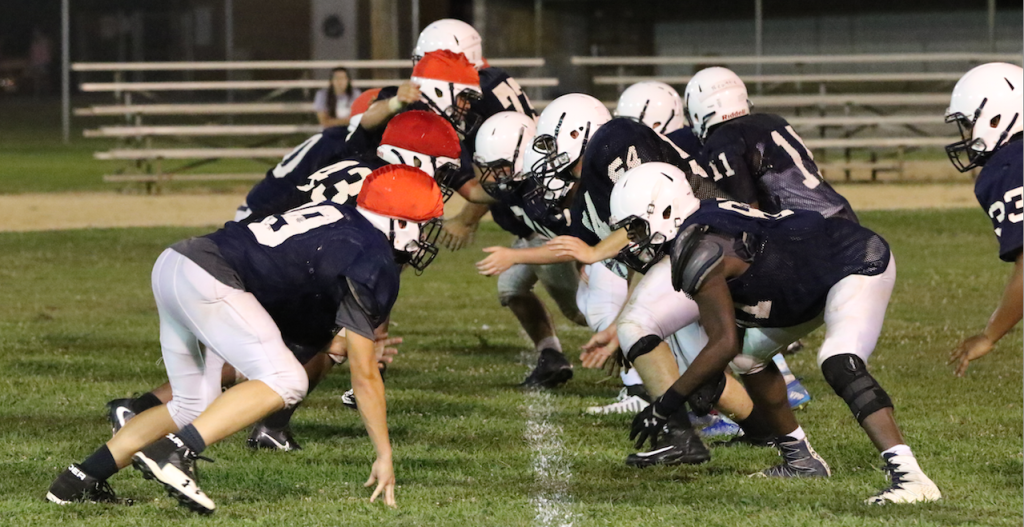 Randolph-Henry High School participates in an intra-program preseason scrimmage to prepare for 2017 season.

Randolph-Henry High School’s varsity football team enters the 2017 season with a new coach and a new opportunity to establish a winning tradition.

The Statesmen are coming off a 2-8 season and lost some talented players last year’s team due to graduation, but Head Coach Zach Orlando does not see a ceiling on his team’s potential.

He noted the key to success is winning games early, and that is the task that lies before himself, his staff and the team.

“I tell these guys all the time, they’re the foundation,” Orlando said, referring to his players. “They’ve got to set the foundation for the house.”

In the preseason, the Statesmen have shown strength in several different position groups.

“We’ve got about probably five or six guys that can play running back and fullback and the wing back, and that’s three spots,” Orlando said. “So we’ve got two solid units there at those three positions. We’ve got some strength up front, some guys that have come back from last year and are looking to potentially have a big season. Jarrett Martin is a guy up there. He’s a rising senior. He started all of last year, works really hard.”

Another key lineman the coach cited was junior Ryan Skipper.

“We’ve got some beef up front, but those guys got to be willing to play every snap,” Orlando said. “That’s the biggest thing. We’re a little bit thin at offensive line, but we’ve got some good guys up front. We’ve got a couple guys that can compete on the back end.”

Most of Randolph-Henry’s players will be playing both offense and defense.

Orlando said another team strength is its small but good group of linebackers.

For its season opener, R-H hosts William Campbell on Friday at 7 p.m.