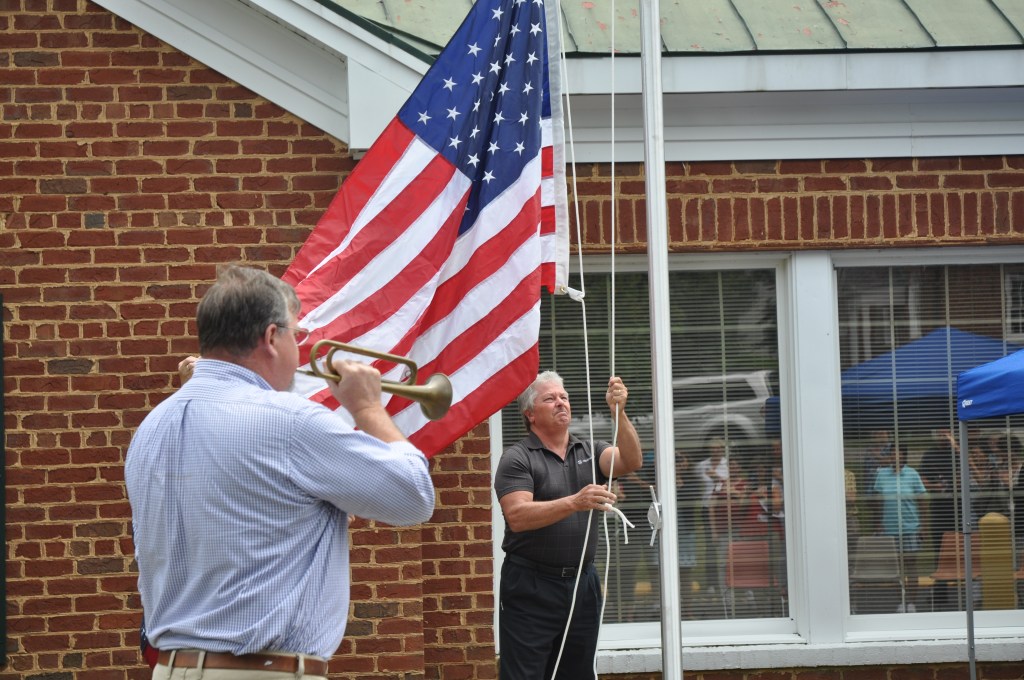 Charlotte Primary Care (CPC) in Charlotte Court House held an event Monday to support and salute area veterans in conjunction with an annual celebration that recognizes health care centers around the country.

During a presentation before the flag pole ceremony, staff of CPC presented collages they made from interviews that they and some of their family members conducted with area veterans.

During the event, Woodmen of the World donated and installed a flagpole to honor area veterans.

Woodmen of the World is the community service wing of WoodmenLife,

a life insurance provider. Woodmen of the World has provided flag and flag poles for area community centers and churches in the past.

While 14 veterans in the area were interviewed, there were many more who attended who shared their own stories and experiences in the service.

Retired Sgt. Maj. Douglass Randolph, who served in the Army for 26 years — including a stint in Vietnam — said while he and other soldiers returning from Vietnam were not treated well, the Monday event was evidence that things were changing.

“People don’t realize how much service members and their families go through,” Randolph said, noting the support and sacrifices family members of veterans undertake.

Susan Davis was interviewed by CPC staff member Alyssa Crosby. Davis said the interview meant a lot to her, having also gone to the center for doctor’s appointments.

“It really tickled me,” Davis said, who was a master chief in the Navy during a time where many women did not take such role. “I think it’s so wonderful that the place I go to for all of my medical needs took the time to know me … It’s so heartwarming.”

“We thought it would be a good time this year to recognize our veterans at the practice,” Palmer said.

During the event, staff served hot dogs, fruit and cookies to veterans and their family members.

Palmer said the center has hosted a pilot program for veterans called Accessing Care Closer to Home (ACCH). She said about 30 veterans are in the program, and though the program was only meant to last two years, veterans enrolled in the program have been able to remain in it, Palmer said.

Palmer said the center began holding annual events four years ago in conjunction with a national event that celebrates health care centers throughout the U.S.

One of the veterans who spoke during the event was Steve Vanness, a medic in the Navy between 1965-69. He said he served in Vietnam as a medic for the Marine Rifle Company. Vanness said the day at the CPC had an impact on him, and he thanked members of the community for their support.

“I’m thankful for being here in Charlotte Court House with a lot of wonderful people,” Vanness said.