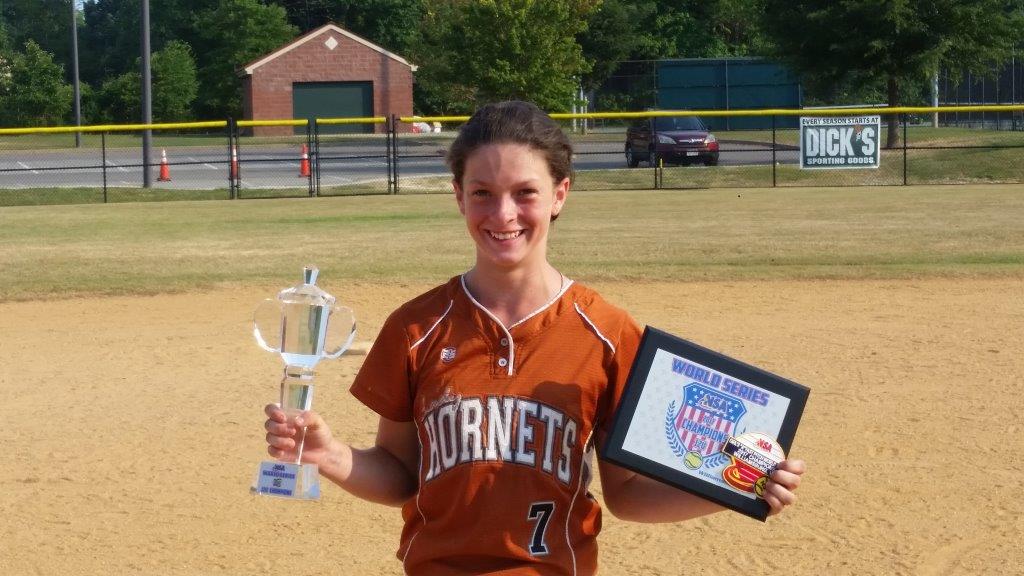 Taylor Trent, of Charlotte Court House, celebrates with the awards that came after her travel softball team, the Hanover Lady Hornets 12U, won the recent NSA Class A World Series in Williamsburg. She was also a key contributor for the Charlotte County Majors All-Star baseball team.

Taylor Trent, of Charlotte Court House, spent July as a key figure in two different worlds, but both of them took place on a diamond.

Her July started with an impressive run in the District 5 Dixie Youth Baseball Major League All-Star Tournament as a member of the Charlotte County Majors All-Stars. She helped them go 4-2, placing second to a strong Dinwiddie Nationals All-Star squad.

Near the end of the month, she was competing for the Hanover Lady Hornets 12U travel softball team. At the National Softball Association (NSA) Class A World Series that took place in Williamsburg from July 17-21, Trent helped her team successfully navigate a field including teams from 10 different states. The Lady Hornets went 7-0, outscoring their opponents 60-15 on their way to winning the championship. Trent, batting leadoff, had key hits and RBIs and contributed strong defense.

“As exciting as it was to win the World Series, it was equally exciting and a true honor to play for the Charlotte County Majors All-Star team,” Trent said.

She attributes much of her success to Charlotte County Majors Manager Gary Walker.

Walker, who is of distant relation to Trent and who coached her father as well, said, “We’re so proud of her that she does well in school too, but she just has so much determination to succeed, and she’s willing to work (for) as long as you’re willing to work with her. (She) would never quit practice. The rest of the team went home, and she always stayed and did a little bit more, whether it was batting practice or catching practice, sometimes with a baseball, sometimes with a softball.”

Walker said she has the work ethic that will take her a long way in life in whatever endeavor she undertakes.