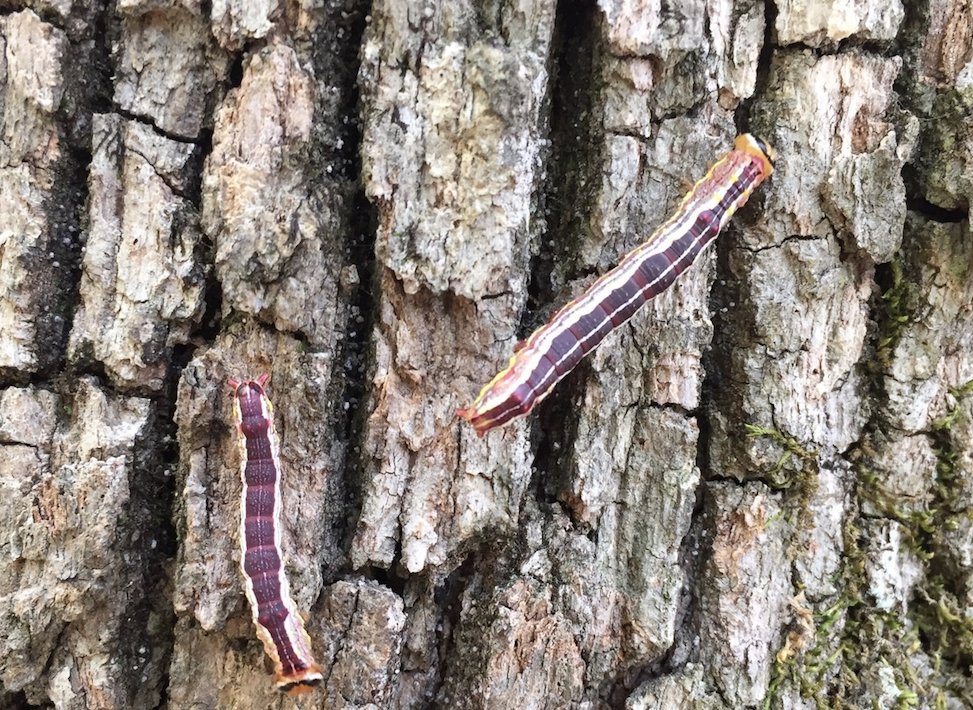 Photo by Amy Bigger Pictured are variable oakleaf caterpillars, with characteristic red streaks down their backs. Charlotte is among several counties across Virginia that have experienced a spike in the caterpillars’ activity, which has led to some defoliation, or loss or damaged leaves. 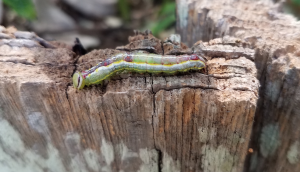 Photo by Amy Bigger
A variable oakleaf caterpillar is pictured moving across a piece of wood. The spike in oakleaf caterpillar population has been cited by the Virginia Department of Forestry as the cause for defoliation in counties across Virginia, including Charlotte.

Charlotte County is one of several counties across Virginia that has experienced a sharp increase in activity from an insect that prompted a notice from the Virginia Department of Forestry (VDOF).
According to a news release from the VDOF, there has been increasing defoliage, or trees that have had their leaves stripped or eaten by the variable oakleaf caterpillar.
The release cited that hardwood trees, particularly white oaks, have also been affected in Charlotte County.

“The calls have been pretty steady since,” Adams said. “Just about every day I’ll get a call.”

Adams said the defoliation has taken place at the Southern end of Charlotte County, with a section of Randolph getting substantially hit by the oakleaf caterpillars with trees in that area experiencing “almost complete defoliation.”

Adams said the large amount of trees in the white oak family in the area, which are often targeted by the oakleaf caterpillars, may explain the defoliation.

He noted there has been activity in the Phenix area as well.

Adams said the caterpillars, which are native to the area, eat the areas of leaves around their veins and stem, creating a skeletal effect or appearance on the leaves and trees.

The variable oakleaf caterpillars range from shades of green, yellow, brown and red. Many have a large red streak down their backs.

Because larvae from the variable oakleaf caterpillar can secrete formic acid when threatened, people are not encouraged to hold the caterpillars as it could lead to skin irritation, according to information provided from the VDOF.

Second-generation larvae from adult oakleaf moths will begin to feed this month, according to the VDOF, and upon completion of feeding in September will move to the ground to spin cocoons.

Adams said for most trees, the defoliation would not kill or extensively damage the trees, noting that it would take several rounds of defoliation to cause serious strain.

Adams said it is common, particularly in a heavily wooded area, to hear and see objects fall to the ground caused from the oakleaf caterpillars, including pieces of leaves, wood and even excrement from the caterpillars.

He noted that natural phenomenons, including spikes in activity from certain insects and mammals, are common, and said there is not much else to do except to wait for the spike in activity to pass, which will be monitored by foresters.

“We’re going to keep an eye on the situation,” Adams said. “Hopefully it will run its course.”