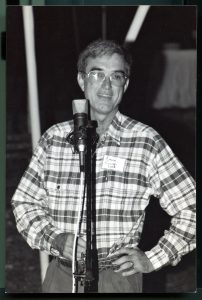 Charlotte County native Gene Bishop Dixon Jr. — who served as president of Kyanite Mining Corp. and chairman of The Disthene Group Inc., the parent company of Kyanite — is being remembered as a man of strong moral character and vision, coupled with a sharp prowess for honesty, business and treating people fairly.

Dixon was raised in the Cullen community.

Later in life, Dixon, a graduate of Randolph-Henry High School, embarked on a 44-year relationship with The Bank of Charlotte County, serving as director and chairman of the board, according to his obituary.

After a battle with prostate cancer, Dixon, 74, died at Chellowe, his home in Buckingham, July 24.

He was the third generation of the Dixon family to own and operate Kyanite Mining — Buckingham’s largest private employer, following in the footsteps of his father, Gene Bishop Dixon Sr., and grandfather, Guy Alexander Dixon, who were part of an early group of about 10 people who purchased then-Kyanite Products Corp. out of bankruptcy in the early 1940s.

After Gene’s father died in 1974, he became president of Kyanite Mining Corp. In 2005, Gene Jr. would become chairman of The Disthene Group while his son, Guy, would become Kyanite’s president.

Dixon — known affectionately as “Mr. Gene” to many who knew and worked for him — was born in Cullen in Charlotte County on Feb. 26, 1943, according to his obituary. He graduated from Randolph-Henry High School in 1961 and attended Hampden-Sydney College (H-SC) before joining the U.S. Marine Corps in 1966.

According to his obituary, Dixon “made a distinguished career for himself at Kyanite Mining Corp., where he did every job from collecting the change out of the Coke machines to lighting the dynamite fuses by hand to serving as president.”

Dexter Gilliam, who serves as the president and chief executive officer of The Bank of Charlotte County, said Dixon served as chairman of the board and a member of the board of directors of the bank from 1974-2016.

“He was obviously well-thought of and well respected by all of the employees during that time,” Gilliam said.

He called Dixon a “valued director and chairman of the bank for a lot of years,” terming him a “dynamic individual.”

“His love of history, notably that of our founding years as a republic, inspired him to devote himself to preserving Virginia landmarks as diverse as local slave cemeteries to the storied home of Patrick Henry at Red Hill,” according to his obituary.

He ended his career as chairman of The Disthene Group Inc., the parent company of Kyanite, The Cavalier Hotel in Virginia Beach and Blue Rock Resources.

Guy, who currently serves as president of Kyanite, said his father, like him, worked at the mine when he was a teenager. When Gene exited the Marine Corps in 1968, he became involved in the operation in a professional capacity.

Guy remembers his father teaching him and his siblings — Arch and Vail — moral character.

“When I was real young, he instilled … giving it 100 percent, and maybe more than that. Never quitting was a big, big thing.”

Guy said his father taught him the people who prevailed in the end “were the people who just kind of don’t give up and who get up every morning and put on their boots and try again no matter what … failures the previous day had brought. The persistence of never giving up kind of pays off.”

For more than 22 years, Dixon served as a trustee at H-SC and was on the Southside Community Hospital Board of Managers for 33 years.

A funeral was held Saturday at the family cemetery in Buckingham followed by a celebration of his life for family and friends at Chellowe.