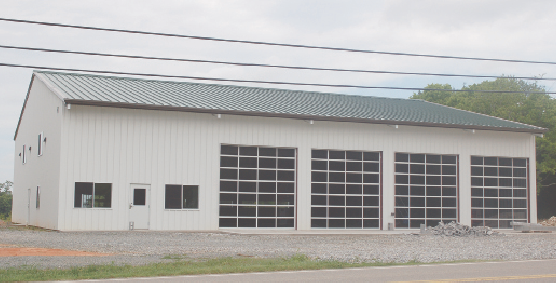 A fundraiser is underway to finance a brick exterior for the new Charlotte Court House Fire House, located at 608 David Bruce Ave. — across the street from Randolph-Henry High School.

According to a press release from the fire department, volunteers are seeking donations to purchase bricks for the sides of the 7,200 sq. ft. building.

“Its central location will help the department respond quickly in all directions,” officials said in a press release. “The new building is white. In order to help it blend in with the historic character of Charlotte Court House, plans are proceeding to brick it. The chosen brick matches that on the David Bruce Building (the old Health Department) in size and shape. The mortar color will be the same as well. The details over the windows and doors will be copied from those at Randolph-Henry with a buff keystone center. The present challenge is funding the project.”

According to the release, $5 purchases two bricks. “Over 20,000 bricks are needed to complete this project.”

“If you would like to make a donation in memory or honor of someone special, note that on your donation. A display will be created in the firehouse documenting these gifts,” officials said.

According to veteran firefighter Chris Russell, who serves as the department’s chief, the current firehouse was never intended to serve the needs of the department.

“It was never constructed as a firehouse. It was originally a church, then it was a used car lot and it was not set up to be a firehouse.”

The current facility is lacking in space, Russell said. “We’ve got two trucks coming out of one door on each side.”

“It’s going to be a big improvement. We’ll have a training area where we can do training there which we don’t have now,” Russell said.

“We’ll have bigger doors to make trucks easier to get in and out of and taller doors … The building we’re in now we have to make sure the trucks are no more than 9 feet, 8 inches tall because they won’t fit. With the new building, we won’t have to worry with that.”

The department currently has four trucks at its existing firehouse, located at 350 George Washington Highway.

The new building is 30 feet tall, he said.

“We’ll be able to do our own training,” Russell said.

He said volunteers should be able to locate the trucks in the building in late fall.

“As far as the training and the offices and the bathrooms and all that, all that will be later on. It’ll probably be next year or later before all that’s done.”

The firehouse will be relocated to 608 David Bruce Ave., located across the street from Randolph-Henry High School.

“They wanted to match the surrounding area a little better,” Russell said regarding matching the bricks with other buildings in the court house area.

According to Russell, the fire department will brick the front of the building, while the donations will go toward the sides and back with brick.

“The front will get bricked; we’ve got that budgeted. But the front is way cheaper to brick than the sides … The doors are in the front, so it takes up a lot of space.”