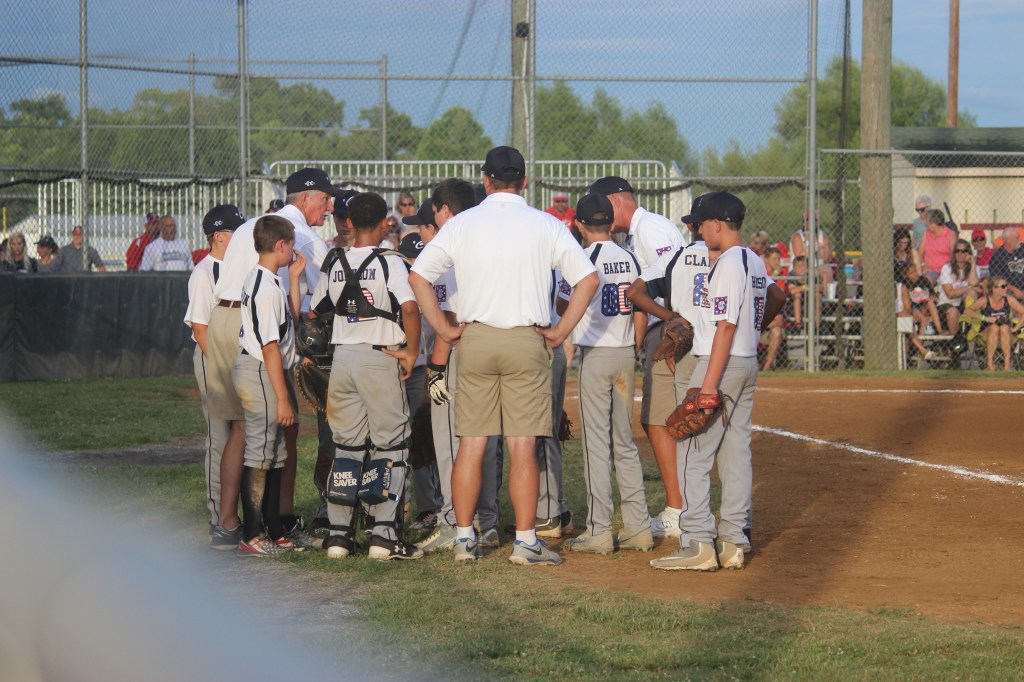 The Charlotte County Major League All-Star team entered Monday as the only undefeated team in the six-team District 5 Dixie Youth Baseball Major League All-Star Tournament held in Farmville. Manager Gary Walker, far left, gives instructions to his Major League team during the tournament. Charlotte has struggled defensively at times, but it has made the big plays needed to preserve victories in the end.

Every game the Charlotte County Major League All-Star team had been involved in going into Monday’s action had been a nail-biter, but in each contest, Charlotte came up with the clutch plays to secure the win.

The Charlotte All-Star team was 3-0 — the only undefeated team left in the six-team District 5 Dixie Youth Baseball Major League All-Star Tournament in Farmville.

“We’ve had some close games,” Charlotte Majors Manager Gary Walker said. “We’ve been giving up a lot of runs that we shouldn’t have given up. Our defense has not been as strong as it normally is.”

He said this has been a surprise, but he was quick to note that it is called youth league baseball for a reason, meaning consistency can be a struggle for young players.

“But when crunch time came, when it got down to the end and we needed to make a play, they made it,” he said of his players. “So, they know how to do it. It’s just a matter of getting it done when you need to.”

In their third game of the tourney, the Charlotte All-Stars earned a big win, 7-6, against the Dinwiddie Nationals All-Star team, a squad that Walker said had been considered a favorite to advance to the World Series.

He noted that the Sunday game had a rain delay of two hours.

Charlotte was led by strong pitching on the night, with Cade Jordan getting the start against the Nationals.

“They got several good hits, and they ended up scoring two or three runs off of him, but they never hit a home run, and he kept them off balance,” Walker said. “And our defense played really well. We turned a double play one inning to get out of a little jam.”

Jordan got Charlotte through three and two-thirds innings, and Tucker Webb finished the game with strong pitching as well.

Walker said the team’s No. 12 hitter in the lineup, Jase Lipscomb, contributed to the win in an important way with a home run.

Thomas Johnson had three hits, and Taylor Trent, also a home-run hitter over the weekend, played well at the catcher position.

On Saturday, Charlotte won 11-10 against the Crewe-Burkeville All-Star team.

“We hit the ball, and we had timely hitting,” Walker said.

In the bottom of the fourth inning, when Charlotte was trailing by a few runs, “we got a couple hits and a walk, and then Cole Feinman, (with) his first home run of his career, hit a grand slam home run…” Walker said.

Ben Gibbs, who Walker described as the “smallest kid on the team,” contributed in a big way with a home run.

When Charlotte was down early on, Johnson rejuvenated his team with a homer.

“In the sixth inning, when we had to get the outs, we made three plays and got out of the game, so got another win,” Walker said.

The Charlotte Majors opened their tourney run with a 13-11 victory over the Dinwiddie American All-Star team, holding on for the win after taking 7-0 and 13-2 leads.

Webb was key to this victory by hitting a momentum-shifting home run.