For love of county and the game 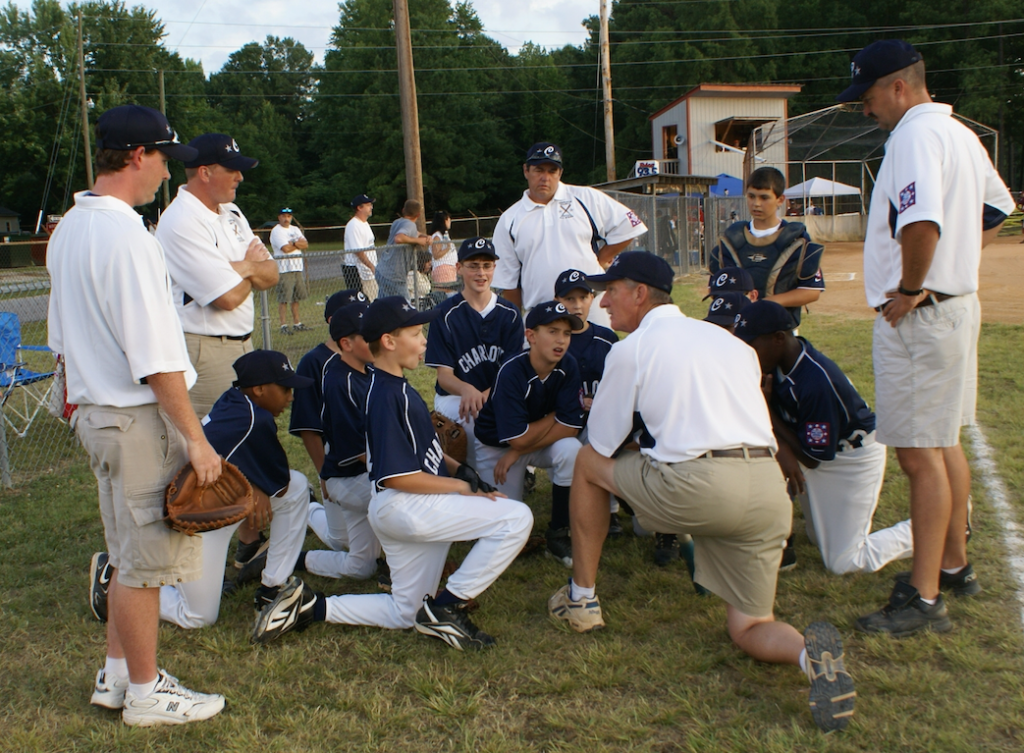 Charlotte County has a remarkable history of producing quality baseball teams and players, and a history like that is not made possible without people picking up the torch and being willing to pass their knowledge and principles on. Gary Walker has been a key torch bearer for the past 45 years.

He began coaching Charlotte County Dixie Youth Baseball in the summer of 1973.

“When people talk about the Charlotte County program, Gary Walker’s name is one of the first ones to come up as well as the other legends that you hear on the radio from Richard LeSueur and all them,” said J.R. Allen, the head varsity baseball coach at Randolph-Henry High School. “But you say anything about Dixie Youth Baseball, Gary Walker’s name comes (up), and a lot of people know Gary Walker because of baseball.”

Allen knows firsthand, having played for Walker more than 20 years ago.

Allen credits Walker and the other coaches of Charlotte County Dixie Youth Baseball for helping make the Randolph-Henry varsity team as successful as it is by giving many of the players such a strong foundation when they were young.

The Statesmen are synonymous with winning, having produced Virginia High School League Single A state championships in 2002 and 2005. Allen was a coach for both squads.

In the past four years alone, Randolph-Henry has gone 75-17, accumulating three conference tournament championships — two in Courthouse Conference 37 and one this year in Quad Rivers Conference 34.

Josh Jones, the 2017 Conference 34 baseball Player of the Year, is the lone player to have been on the team for each of the past four years, and he, too, was once coached by Walker.

“I played for him all through Dixie Youth,” Jones said. “He’s an incredible coach, and he’s had a huge impact on my baseball career.”

Jones, who will soon be playing NCAA Division I ball for James Madison University, said Walker taught him the respect, hustle and physical parts of the game, while helping him develop character as a person off the field as well.

Walker, who also serves as chairman of the Charlotte County Board of Supervisors, is motivated to coach by love.

“I love Charlotte County and have spent most of my adult life trying to repay the good fortune I have of living here through service to the county and especially the children,” he said.

Back in 1958, he was actually in the shoes of the children he coaches.

“I was allowed to play on the very first Dixie team in Charlotte Court House,” he said. “Although I was only 8, the team needed ‘bodies,’ and with two older brothers, I was not afraid and thought I was as big as anyone.”

“When I was at R-H, we only had a varsity team, and after getting cut in eighth and ninth grade, I finally made the team,” he said, with his playing opportunities coming at second base and catcher. “I was second string and did not play much, but sitting next to Coach (Pete) Gowin I began to learn more about coaching.”

Walker said he got most of his coaching education from his uncle, Carl Vassar, who used to coach the Charlotte Court House team. And when Walker aged out of Dixie Youth Baseball, he would help Vassar by facilitating throwing and batting practice and by being a gofer. 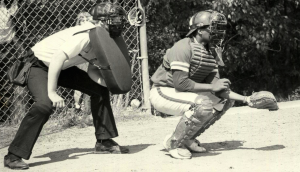 In a photo taken in the early 1980s, Gary Walker, left, serves as an umpire, an activity he pursued for some time while developing his coaching career.

“I had fallen deeply in love with baseball early on and was always attracted to it,” Walker said. “I umpired Dixie games through high school and college and umpired high school games for about 20 years while I began my coaching career. Carl was my uncle/surrogate dad, and he encouraged me to stay with the coaching.”

Walker formed a special bond with the boys he coached.

“Having three daughters, the team players became my ‘sons,’” he said. “Teaching them to play the game and more to love the game became a passion. The dedication and hard work it takes to become a good player translates into life experience that will serve them well as they mature.”

He said it was Vassar’s dream for the Charlotte County boys to one day advance to the Dixie Youth Baseball World Series.

“Shortly before his death he came by and after a long conversation he told me that I ‘had’ to take up that dream,” Walker said. “In 2008 on the 50th anniversary of Dixie in Charlotte, we had our first state championship and trip to the series.”

“Having seen the thrill for the teams to win at that level makes you want to coach forever, hoping to share that experience with other children,” he said.

While providing coverage of Dixie Youth Baseball in the area, Richard LeSueur has followed Walker’s teams for years, and he said he never met a manager whose teams were more prepared than Walker’s squads.

“He always scouts the other teams in the tournament, and he is absolutely a student of the game,” LeSueur said. “His teams are fundamentally sound — great defense, solid pitching and timely hitting. It’s always a pleasure to watch/follow his teams.”

And Walker has now had the pleasure of coaching multiple generations of players, including Carlton and Joseph Reed, Greg and Cameron and Matthew Vassar and Todd and Brayson Arrington.

“This year’s team had three former players with children — Mac and Jay Gee, Tim and Cade Jordan (and) Ken and Taylor and Colby Trent,” Walker said.

He noted there is a special dynamic that comes with coaching a second generation of players.

“Dad’s have ‘warned’ their children how hard it is to play for me but also told them that they will learn to be better players and better people,” Walker said.

And his willingness to pass his knowledge and principles on has helped keep Charlotte County’s tradition of baseball success alive and well.