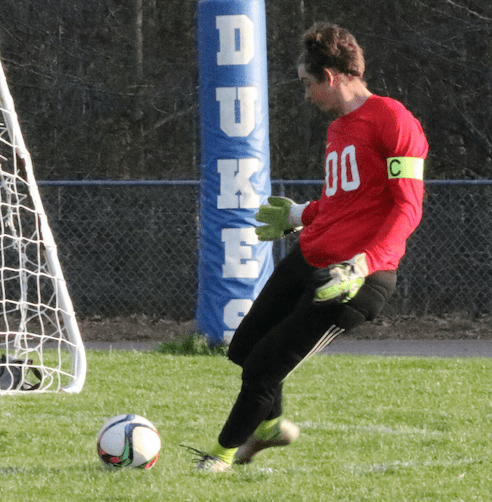 Photo by Titus Mohler Randolph-Henry High School senior goalkeeper John Walker was one of three Statesmen to be named to the 2017 All-Quad Rivers Conference 34 first team.

Randolph-Henry High School’s varsity boys soccer team avoided complacency during the 2017 season, favoring consistent progress on its way to finishing with a 10-7-1 record.

The Statesmen advanced as far as the Quad Rivers Conference 34 tournament semifinals in the postseason.

“I think they’ve done really, really well,” Randolph-Henry Head Coach Patrick Shay said of his players. “They’ve learned tremendously. We’ve had some beginners that came out there and performed really well. They continuously improved throughout the season. A lot of times teams will kind of peak out, but I think these guys, they kept adding something every week to their arsenal.”

A highlight of the season came in the conference tournament quarterfinals. The fifth-seeded Statesmen defeated host No. 4 Brunswick High School 8-7 in a sudden death round of penalty kicks after two scoreless overtimes and two rounds of penalty kicks that still left the game tied.

Randolph-Henry was represented on the All-Conference 34 first team by a trio of seniors — midfielder Shayne Maloney, goalkeeper John Walker and defender Michael Nichols.