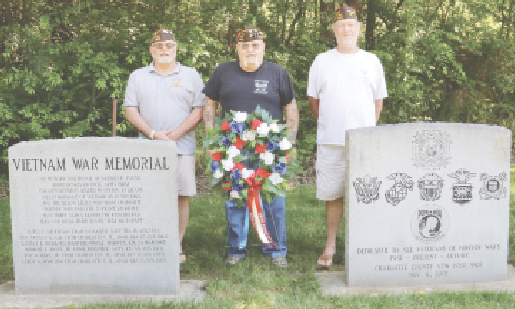 Four veterans gathered together at the Veterans memorial along Drakes Main Street on Monday to pay their respects and keep alive the memory of fallen active-duty U.S. armed forces members from Charlotte County and abroad.

“If we don’t remember them, no one else will, and these are our hometown heroes,” said Monroe Tuggle, a Past 4th District Commander of Veterans of Foreign Wars (VFW) Post 8902, who served in the U.S. Navy from 1967-70.

Tuggle said that it was in 2007 that the VFW put up the other stone dedicated to all veterans of foreign wars — past, present and future.

Hamlett noted that when the Vietnam War memorial stone was first introduced, a large crowd of maybe 100 people was in attendance.

Tuggle said the VFW has come to the memorial every year since on Memorial Day.

Hamlett said people have gotten so caught up in the holiday aspects of Memorial Day that they have lost the significance of the day.

“If you look at the television, all the TV wants to do is advertise sales, and we try to remember those that died in the line of duty, so they won’t be forgotten,” he said.

He acknowledged that everyone has food cooking for the family on the day but highlighted the need to make sure the day is about more than just that.

“These are the folks who died in the line of duty, made the supreme sacrifice,” he said.

Hamlett said that if the VFW does not hold memorials like the one he was participating in Monday and make it perpetual, eventually people will forget.

“It’s like when we went into Iraq, and I was in Afghanistan. We call Afghanistan ‘the forgotten war’ because nobody even talked about it,” he said.

He noted that actively participating members are needed at VFW Post 8902.