Turnaround on the pitch 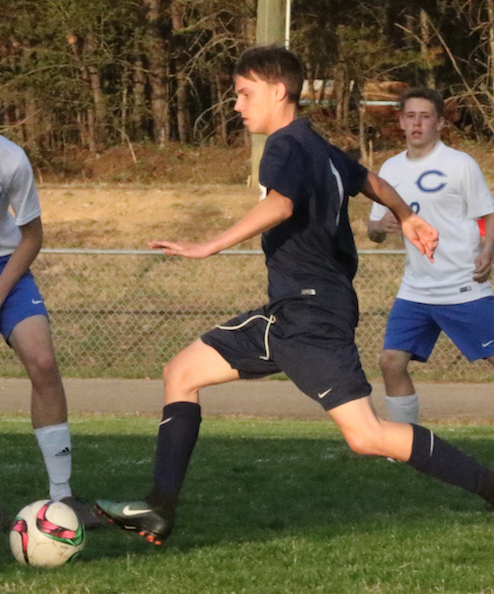 R-H senior Shayne Maloney has been potent on offense for the Statesmen, helping them rebound from a 1-3-1 start.

Randolph-Henry High School’s varsity boys soccer team has made its rough start to the season a distant memory by winning six out of its last seven games.

A 4-3 road win against Bluestone High School on Friday pushed the overall record of the Statesmen to 7-4-1, as listed on the James River District website.

Patrick Shay, head coach for Randolph-Henry, said the team “has been steadily getting better.”

Focusing on the latest example of this improvement, Shay noted that the Statesmen were led Friday by senior Shayne Maloney, who scored all four R-H goals.

Bluestone scored two minutes into the match,  but Maloney evened the score from a free kick. Near the end of the first half, he gave his team a 2-1 lead by scoring on a penalty kick.

Shay said that in the 17th minute of the second half, Maloney scored again, this time with an assist from freshman Noah Napier.

Four minutes later, the Barons responded to make the score 3-2, but six minutes after that, Maloney pushed Randolph-Henry’s lead back to 4-2.

Bluestone scored in the 30th minute but would not find the back of the net again.

“I am very happy with the guys’ performance,” Shay said. “The past three times that we have played Bluestone, the games ended in a 2-2 tie.”

On May 3, the Statesmen defeated visiting Cumberland High School 4-1, and on April 28, they beat visiting Nottoway High School by forfeit.

The only loss to interrupt Randolph-Henry’s recent run of success came April 27 via a 4-2 result against host Goochland High School.

In their three games prior to that, the Statesmen outscored their opponents 13-0.