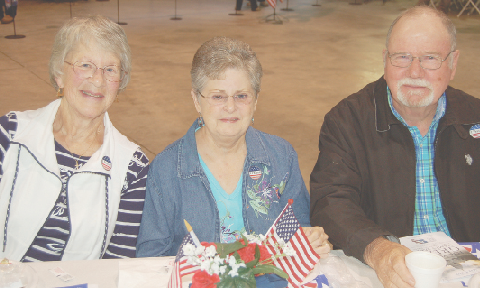 He noted all churches in the area were invited to the event.

Hall said he always tries to start the event with something inspirational, citing he asked himself, “What can we do to be bold?”

“We took God out of a lot of things that we’ve done and we need to put Him back where he deserves (to be),” Hall said. “We do this once a year in the shop. We try to do a lot of other things; we do this once a year to honor Him and bring the community together to worship God to put Him back where he’s supposed to be, and we say, ‘Well, how I can do that?’”

Hall said God has plans for everyone to share their story.

“Everybody has a story — everybody. God has touched them a different way and has in my life, your life,” Hall said. “We all should use that story to tell others to bring them closer to Christ.”

Hall said he uses Red Oak Excavating — a firm that bears a logo of Christian crosses — to spread the word of God.

Pastor Jackie Wray, of Union Chapel Baptist Church, who spoke during the program, said to those in attendance that in order to make the country great again, they had to start with themselves.

Wray said those in attendance needed to seek God first.

Pastor Robert Perrin, of Grace Community Church, spoke on government, business and military during the breakfast.

“Our representation of those who serve has stood firm, and now it’s our responsibility to stand firm for our country,” Perrin said.

He said that’s accomplished through prayer.

The Rev. Justin Hicks, of the Charlotte County United Methodist Church, encouraged those in attendance to think of their family through prayer.

“If you don’t have a church family, we invite you to find one because those of us that are a part of a community that is the body of Christ know what kind of support and love, accountability and trust comes from being a part of those communities,” Hicks said.

Pastor Jerry Jordan, of Friendship Baptist Church, said he knew there was a lot wrong with the United States, citing the community gathering at the prayer breakfast was what was right with the nation.

“Another year has come and gone and I’m still proud to be an American,” Jordan said.