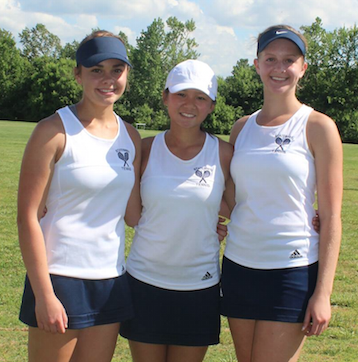 The Lady Statesmen carry a 10-0 record into the postseason, which starts Wednesday at 4 p.m. for them. They hold the No. 1 seed in the Quad Rivers Conference 34 tournament and have a first-round bye, so they will begin play in the second round against the winner of a first-round match between Brunswick High School and Greensville County High School.

With a win Wendesday, Randolph-Henry will play again at the end of the week against the victor in the first-round matchup between Prince Edward County High School and Goochland High School.

“We have finished our regular season with great results, we think,” R-H Coach Shannon Feinman said.

In singles play Friday, Meredith Feinman won Lauren Lawson 8-0 at No. 1, Couper Webb defeated Emily Giuliano 8-3 at No. 2, Helen Lin topped Mason Canada 8-3 at No. 3, Eliza Walker fell to Ilyana Servis 2-8 at No. 4, McKenzie Sharpe triumphed over Lindsay Austin 8-3 at No. 5 and Annie Sandridge was victorious against Aynsley Williams 8-1 at No. 6.

In doubles play, Feinman and Webb defeated Lawson and Canada 8-0 at No. 1, Lin and Walker defeated Giuliano and Servis 8-4 at No. 2 and Sharpe and Sandridge defeated Williams and Depalmer 8-3 at No. 3.

Friday was also a momentous occasion for the trio of seniors on Randolph-Henry’s team — Feinman, Webb and Lin — as it was Senior Night. The three girls have been instrumental in turning the varsity girls tennis program around.

Meredith Feinman has spent four years at the No. 1 singles seed and holds a record of 41-6. She was the Courthouse Conference 37 girls tennis Player of the Year for three years.

Webb could not play her freshman year due to a severe leg injury, but since then she has been the No. 2 singles player, accumulating a 31-4 record.

Lin has gone 34-9 as a singles players the past four years, showing consistent improvement each season.

Feinman and Webb twice won the Courthouse Conference 37 Doubles Team of the Year honor, and in three years as Randolph-Henry’s No. 1 doubles team, they have gone 36-2.