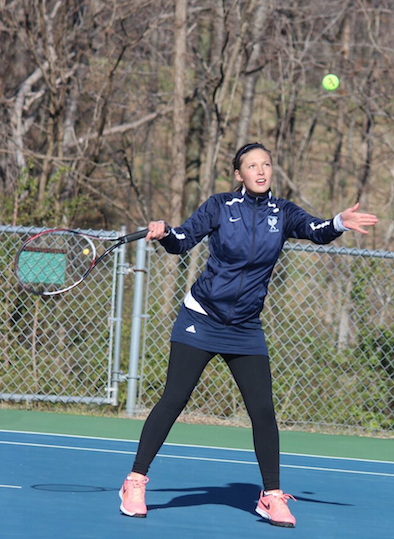 Randolph-Henry High School eighth-grader Grace Algeier has shown strength in exhibition matches and is expected to be an important part of next year’s varsity squad.

“That brings us to 8-0 on the season and should solidify our spot as No. 1 in the conference going into the rest of the week,” Lady Statesmen Coach Shannon Feinman said. “We are the only team without a loss, and we have now beaten Goochland (High School) and Prince Edward.”

She noted that Prince Edward beat Goochland earlier in the season.

As for Monday’s competition, “the weather was iffy, but we were able to get the whole match in plus some exhibition in high wind and a few sprinkles of rain. We had an excellent fan turnout as well.”

In the singles matches, Meredith Feinman defeated Cordelia Morgan 8-1 at No. 1, Couper Webb defeated Grace Rust 8-0 at No. 2, Helen Lin defeated Kendasia Hensley by forfeit at No. 3, Eliza Walker defeated Melissa Williams 8-0 at No. 4, McKenzie Sharpe defeated Ellis Jones 8-1 at No. 5 and Annie Sandridge defeated Emma Watson 8-1 at No. 6.

In the doubles matches, Feinman and Webb topped Morgan and Tamara Marshall 8-0 at No. 1, Lin and Walker outlasted Rust and Williams 8-5 at No. 2 and Sharpe and Sandridge defeated Eboni Green Taniya Manns 8-1 at No. 3.

“The girls did an excellent job taking instruction from Coach Murrie Bates on how to make adjustments for the difficulties with high wind on ground strokes and serve,” Coach Feinman said. “A couple of the girls did not have their smoothest matches of the year, but we were proud of them for powering through and getting the wins.”

She added that her players did well in following some advice given to them earlier in the season by Longwood University Head Women’s Tennis Coach Maria Lopez at a hitting opportunity in Farmville.

Feinman said Lopez talked about the importance of responding well on days when you are less than your best, noting that you cannot control the weather, but you can control your effort level, footwork and attitude.

“Our girls did a great job with those three things,” Feinman said.

Feinman indicated that if rules allowed eighth-graders to play varsity, Algeier would already be playing.