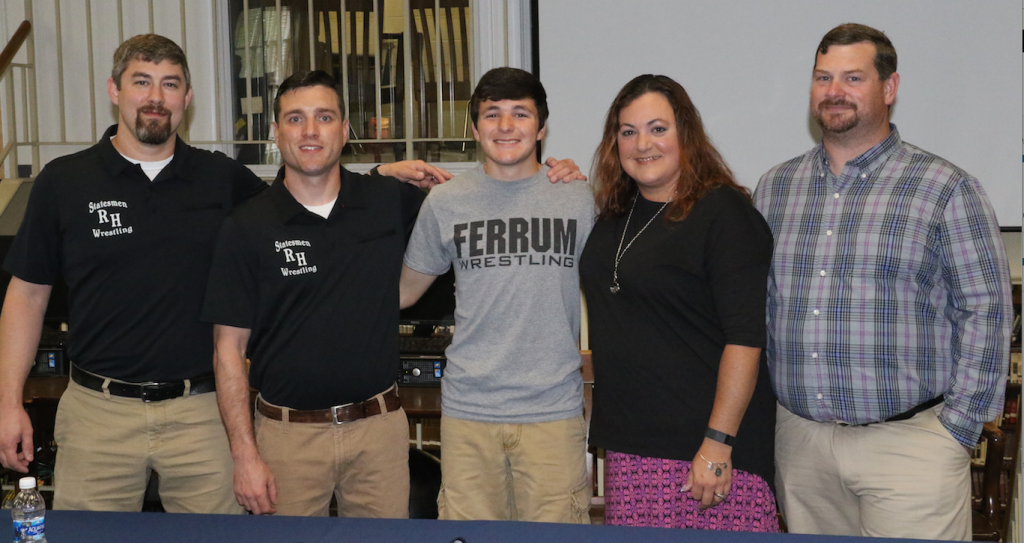 Randolph-Henry senior Christopher Nichols formalized his plans to wrestle at the next level Thursday morning when he signed with Ferrum College during a ceremony held in the Randolph-Henry High School library.

“I love the college I’m going to,” Nichols said. “I love the teammates there. I love the coaches there. It’s just going to be great. I worked so hard for this. It’s a good day.”

A significant crowd of his Statesmen teammates from both the wrestling and boys soccer programs attended the event, along with his family, friends and coaches.

Nichols participated in wrestling at Randolph-Henry for four years. During the 2016-17 season, he won the 126-pound weight class at the Quad Rivers Conference 34 tournament, and he placed fifth at the Region 2A East tournament.

He said that the idea of wrestling at the college level has been in his mind for approximately one year.

“I wasn’t really into wrestling until last year, but ever since then, I just wanted to wrestle in college,” he said. “I just want to be up there with the greats, make a name of myself.”

He said he always wanted to go to college somewhere reasonably close to home.

He noted the wrestling team there is new, “they’re rising up. I want to be with them when they get to the top.”

Schwartz said Nichols’ signing with Ferrum is a big deal for Randolph-Henry’s program, showing the younger wrestlers that they can do it too.

The coach said Nichols will bring enthusiasm and energy to the Ferrum Panthers.

Shannon Howard, Nichols’ mother, said, “I’m really excited. I can’t wait to watch him,” and his father, Shawn Howard, later added, “We’re looking forward to see what he can do.”