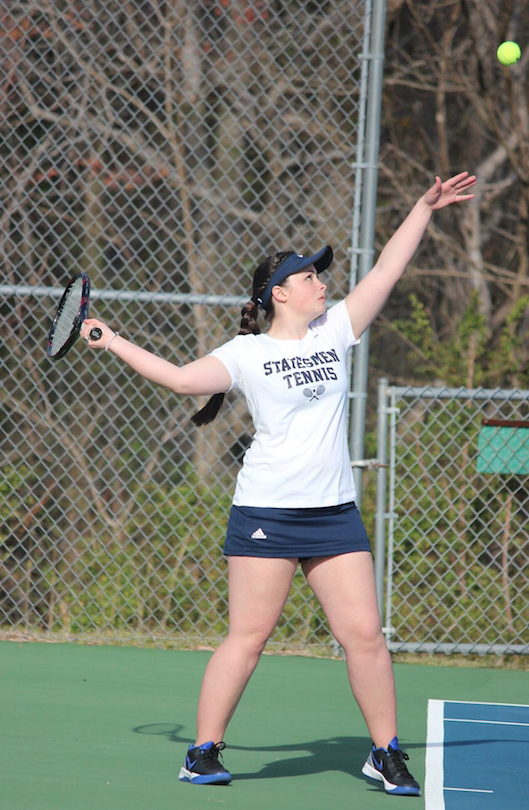 Randolph-Henry High School’s varsity girls tennis team has been so dominant thus far this season that the only way to measure improvement is in comparing its wins.

On April 11, the still-undefeated Lady Statesmen faced Halifax County High School, a Virginia High School League Group 4A squad, for the second time this season, earning an 8-1 home win, a more decisive victory compared to their 6-3 triumph on the road against the Lady Comets on March 23.

“In that earlier match, the team was not battle-tough and struggled with close matches and winning pressure points,” R-H Coach Shannon Feinman said.

But April 11, the Lady Statesmen, a Group 2A team, swept the singles matches, with No. 1 Meredith Feinman, No. 2 Couper Webb, No. 3 Helen Lin, No. 4 Eliza Walker, No. 5 McKenzie Sharpe and No. 6 Annie Sandridge all earning wins.

“Of special note is that in the earlier match, Eliza Walker lost to her Halifax opponent but won this time,” Coach Feinman said. “She was down 2-5 at one time in her match and was able to come back to win in a tiebreak. Also in that earlier match, McKenzie Sharpe lost her singles in a tiebreak to her Halifax opponent but was able to win this time.”

Quite busy this week, Randolph-Henry visited William Campbell High School on Tuesday, it visits Altavista High School on Thursday at 4:30 p.m. and it competes Friday and Saturday in Lynchburg in a quad tournament it has won three years in a row — the Heritage Invitational Tournament.

“The team has set a goal to make another strong showing this year and bring home the hardware if they can,” Coach Feinman said.