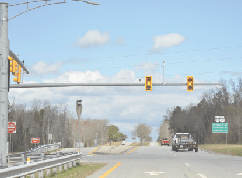 Transportation officials say the stoplight at the intersection of U.S. Route 360 and Route 47 at Crafton’s Gate was activated Thursday.

The new stoplight at the intersection of U.S. Route 360 and Route 47 at Crafton’s Gate in Charlotte County was activated Thursday and is in use.

The stoplights became operational after months of planning and construction, according to the Virginia Department of Transportation (VDOT).

The stoplight is a first for the county, which had none until now.

The recommendation for a stoplight came after complaints of numerous motor vehicle accidents and the project’s receiving a high score based on VDOT’s SMART SCALE system.

“That intersection is dangerous,” Drakes Branch Supervisor Garland Hamlett said in a previous interview. “The last attempt to ‘fix’ the accident intersection failed, and failed miserably. Bandaids do not, I repeat, do not fix problems.”

The existing flashing lights at the intersection were rotated horizontally, instead of remaining vertical, which was intended to avoid the confusion of thinking the caution light was a traffic light that was about to turn red.

The contractor for the project was Elite Contracting Group Inc., headquartered in Petersburg.