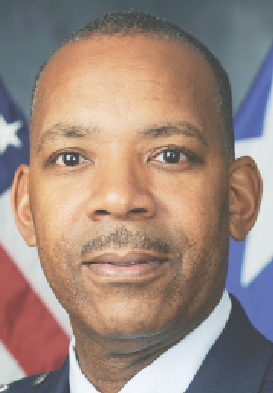 The values instilled in Maj. Gen. Dr. Roosevelt Allen as he grew up on a farm in Madisonville have proven priceless to his highly-successful career in the U.S. Air Force.

Today, Allen is the director of medical operations and research at the Air Force headquarters in Falls Church, as well as the chief of dental corps. He has won several awards for his hard work, including a Bronze Star Medal, the Maj. Gen. Harold Mashburn Excellence in Leadership award and a Legion of Merit with an oak leaf cluster.

Although in his career Allen has been able to travel all over the world, he thinks fondly of his rural upbringing.

“Growing up in the country, and growing up in Madisonville (in Charlotte County), we basically produced just about everything we needed. We had pigs and chickens. My mother was quite the gardener too,” said Allen, the youngest of seven brothers and sisters.

Allen’s parents were farmers who didn’t complete high school nor college, but they made sure to impart the importance of education onto their children.

Four of their children, including Roosevelt, went to college, and all of his brothers and sisters graduated from high school.

His parents believed that education was important to becoming a productive member of society.

“My grandmother used to always say to us, ‘Get as much education as you can. When you get education, that is the one thing that people can’t take away from you,’” said Allen.

After graduating from Randolph-Henry High School in 1978, Allen received a bachelor of arts from Lincoln University in Pennsylvania. He went on to receive his doctorate in dental surgery from Howard University’s College of Dentistry.

In high school, Allen never imagined he would’ve pursued a career in the military.

“I came in thinking I would be in (the military) for three years. Now, I’ve been in for a little over 31 years,” said Allen.

Today Allen still remains close to his family and the rural community that helped to shape who he is. All of his brothers and sisters still live in Virginia, and the siblings get together to see each another often.

Allen said he recently spoke at Randolph-Henry to students interested in pursuing military careers on the importance of leadership.

“I told them that whether they pursued the military or they didn’t pursue the military, whatever they do in life they should try to live their life like a pencil. The first thing about a pencil is that it cannot work by itself. It must be held by another, which demonstrates teamwork,” said Allen.

He attributes part of his success to the support and closeness that a small, rural community like Madisonville offers.

“I’ve had a number of mentors not only in my own family, but also from my community,” said Allen.