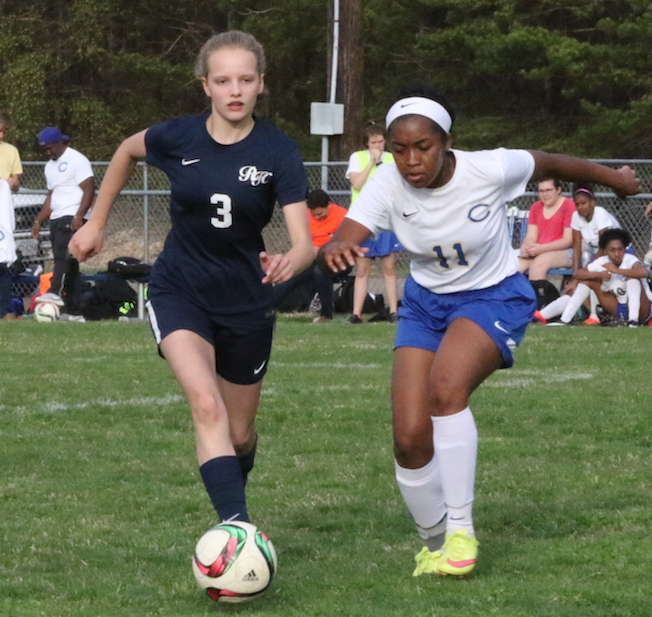 Randolph-Henry High School’s varsity girls soccer team is still aiming for its first win of 2017, but Monday it avoided loss for the first time this season, playing host Cumberland High School to a 1-1 tie.

In the R-H girls soccer program’s second year, the Lady Statesmen are looking to build on last year’s inaugural varsity campaign when they won one game and tied another.

David Ellsworth succeeds Penny Miles as head coach and has led Randolph-Henry to a 0-3-1 record so far.

“I have been very impressed by the Lady Statesmen’s performance thus far this season,” Ellsworth said. “Every game, the girls are tested in new and challenging ways. From having zero substitutes to going up against teams that have junior varsity programs and club programs that build (players) up before they get to the high school (squad), the girls never give up.”

Ellsworth said that Charlotte County’s programs that teach soccer are coed, which means that the boys with speed who are short are placed in midfield and forward positions, while taller, developed girls play defense.

“Thus, when they get to older levels, certain fundamentals are completely missing,” Ellsworth said.

He also noted that many of the players are trying soccer for the first time, not having developed the fine motor skills necessary to play the game when they were young.

“It is challenging to bridge the technical gap,” he said. “Tactically, the team is doing everything it can to compete.”

Ellsworth said he expects them “to perform to the best of their ability. Our team has a heart and determination. This season is about building the program. This means that wins may not appear on the (score)board, but rather in the development of their abilities as players and as young adults.”

The coach said there are several players that stand out on the team.

“Yet, there is one player in particular that has taken the gauntlet and run with it,” Ellsworth said, highlighting junior defender Abby Michaelson, a soccer veteran and one of the team’s captains. “Abby knows the game and her teammates. She can be seen in the middle of the pitch conducting the defense as well as the offense like a professional maestro.”

Ellsworth pointed to sophomore midfielder Lindy Newcomb as an up-and-comer, one who has gained confidence as the season has progressed.

“She has shown this season that she can grow as a player and a person at an incredible rate, a trait that has translated directly into success — culminating in her comeback 20-yard-out finish in our last game,” he said.

The coach identified fitness as the biggest obstacle his team will need to overcome to be successful this year.

“Our team has to work two, three, four times as hard as every other team in the league,” he said. “On average, a soccer player will run seven to nine miles a game. Breaks during that explosive and dynamic battle are crucial. Our team does not have any substitutes most games.”