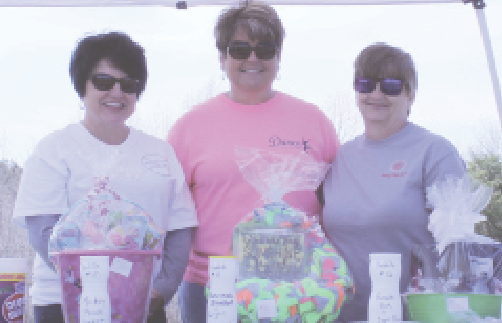 Pictured, from left, Christy Puckett, Yvonne Dix and Teresa Dunaway — three of the volunteers who made Sunday’s tournament possible — help to run the raffle table.

The scholarship and tournament were arranged in the memory of Colton “Cotton” Osborne, a graduate from Randolph-Henry High School.

Osborne died in a tragic all-terrain vehicle accident on Aug. 27. As well as serving as a volunteer firefighter with the Chase City and Bacon District Volunteer Fire Department, Osborne was a multi-sport athlete. He played both football and baseball.

“It means a lot to us,” said Teresa Osborne, Colton’s mother. “Colton was special. He loved to play any kind of sport.”

Originally, Angela Davis, one of the organizers of the event, simply planned on arranging a game between the Randolph-Henry’s baseball team and that of Bluestone. So many in the community, along with friends of Colton, wanted to participate that the event was expanded to everyone who wanted to play.

“I think they actually got enough today for four teams,” said Teresa. “After they finish the first game they’re going to play another game.”

“Colton was always smiling. You can tell by the crowd everybody loved him,” said Davis.

Several volunteers and donors worked together to arrange the tournament. There were basket prizes raffled off, and volunteers ran the grill and concession stand all afternoon.

According to Davis, all of the money raised will go to the Colton Osborne Scholarship.

The scholarship will be divided between two rising freshmen who will play baseball in college.

Davis said she was aiming to raise about $500 per scholarship recipient.

“I’m thinking we’re going to raise more than that,” said Davis. Aside from the raffle tickets sold and the proceeds from the concession stand, there was a $3 entrance fee and a $20 registration fee per player.

The scholarship recipients will be introduced and awarded at the Randolph-Henry and Bluestone senior banquets.

“We’re going to try to make this annual,” said Davis.