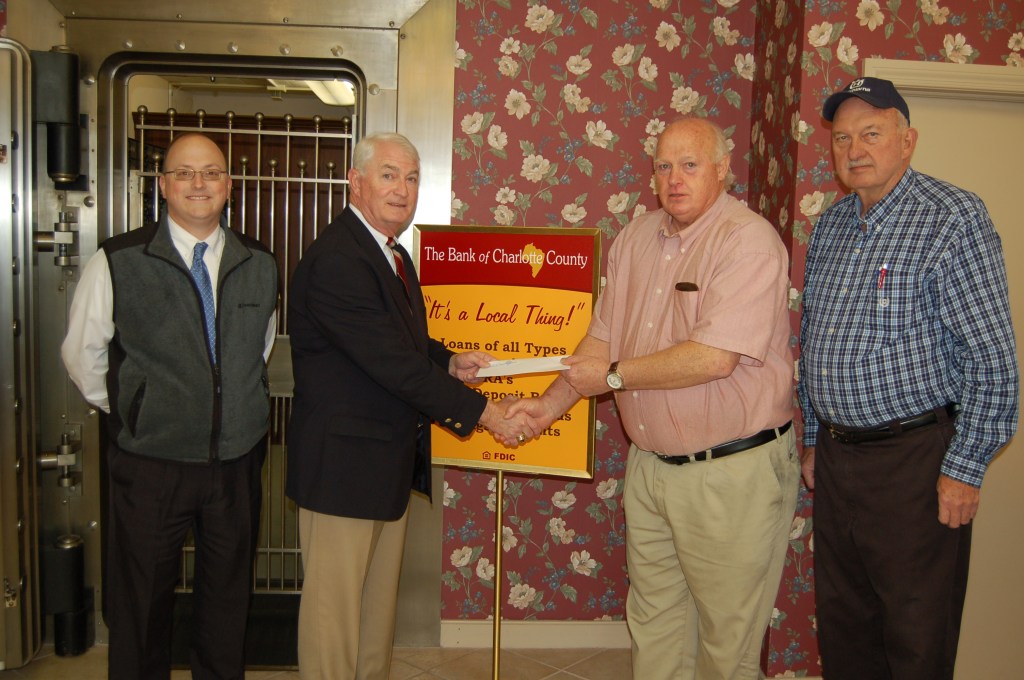 Support from the community has been a hallmark of the 45 years of success of the Charlotte County Lion’s Club. The Bank of Charlotte County recently presenting a donation to club is evidence of this. Pictured are, from left, Bank Vice President Mark Thackston, Bank President Dexter Gilliam, Lion’s Club President Kenny Howard and club charter member Butch Shook

The Charlotte County Lions Club celebrated its 45th anniversary Thursday at Sheldon’s Motel and Restaurant — marking more than four decades of hard work and support from the community.

During Thursday’s celebration, Charlotte Lions Club Chapter President Kenny Howard said the club invited some of its original members to the celebration.

“To celebrate our 45th, we thought, ‘Let’s see if we could bring some of the charter members that are still in the community to our meeting and kind of recognize them,’ because if it wasn’t for the charter members and their interest in starting a club, we wouldn’t be here tonight,” Howard said.

Zone Chair Helen Person, who was visiting from the Farmville Lion’s Club, said she appreciated the invitation to the anniversary.

“I think about 1972 — my goodness — I was a senior in high school,” she said regarding the year the club was founded. “I’m a Legacy Lion — my father was a Lion for 63 years, so it’s a great memory of what Lion’s Clubs are and can be and what you all have done here in Charlotte County is incredible,” Person said.

“The work that you do and the services that you (relay) to your community are unsurpassed, and we thank you,” she offered.

Lions Club District Gov. Heather Jones-Lancto said when it came to the Lion’s Club, it’s hard to pinpoint only a few things that it does for people.

“I always encourage people to give an elevator speech,” she said. “When you meet somebody, you should have an elevator speech; it shouldn’t last for more than 30 seconds,” Jones-Lancto said. “You should be able to tell them all about what Lions do in that little amount of time. But, with all that we do anymore, that’s hard. How do you pick and choose what Lion’s do?”

Jones-Lancto also said it was amazing to imagine the amount of work and accomplishments over the 45-year span.

“To just think about what you do in one year is pretty amazing,” Jones-Lancto said.

Most recently, the club presented donations to the Charlotte County Meals on Wheels and the Barksdale Cancer Foundation.

Internationally, there are 46,000 Lion’s Clubs and more than 1.6 million members, according to the international organization’s website.

The Charlotte club was founded 55 years after the international club’s creation in 1917.

Though the club has given countless donations to the community over the past 45 years, the community has also given back to the club through various means of support.

The day after the celebration, The Bank of Charlotte County presented a check of approximately $1,000 to the club.

Bank President Dexter Gilliam Jr., commended the club on the work it’s done in the community — noting its efforts in improving sight.

“Hopefully that’ll go a little ways with helping with the treasury and the mission and projects and things of that nature,” Gilliam said. “(The bank has) been here for 105 years now and we plan on being around a lot longer than this, so we appreciate everything (the club) does for us.”