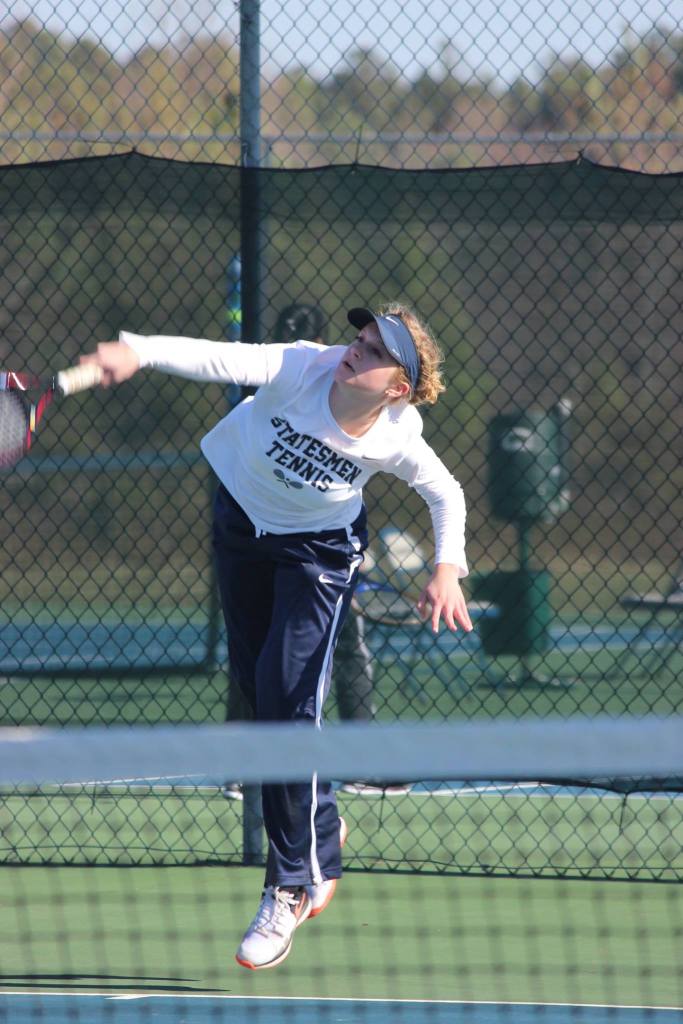 R-H senior Meredith Feinman has been the No. 1 seed in both singles and doubles since her freshman year, nabbing three Courthouse Conference 37 singles titles, plus two doubles titles with cousin Couper Webb, in her standout career.

The Randolph-Henry High School varsity girls tennis team has started off its 2017 season with little contest, dropping only three matches — two singles and one doubles — en route to a perfect 3-0 start. It’s an ideal beginning for the successful squad, which is looking to win its fourth conference title in as many years.

The team carried its momentum from this three-peat to the Region 2A West tournament, advancing to the semifinals before falling to Gate City High School, 5-1.

Not only a powerhouse in their own conference, the Lady Statesmen amassed an impressive 15-3 record overall and captured their third Heritage High School Invitational Tournament championship in Lynchburg.

Feinman continued her notable singles career at the No. 1 seed by notching her third conference title in four seasons.

“We’ve been achieving a lot of success,” said Assistant Coach Sharon Feinman. “Last year’s season was very successful and culmination of the hard work from the girls. They concentrated on solid tennis fundamentals and mental toughness.”

The 2017 Lady Statesmen, led by seniors Meredith Feinman, Webb and Helen Lin, will face new challenges as they join Quad Rivers Conference 34. Although joining a new conference can be difficult due to new, never-before-seen competition, Shannon Feinman said the coaching staff and players are excited and have been scouting the other teams and preparing thoroughly.

“Expectations are high that the season will be successful,” said Coach Feinman, silencing any doubts that the conference change could hamper the team’s success. “Our goal is to make a showing in regional competition, and the ultimate goal is to make it to state. However, we want to take it one step at a time.”

The increased team size could get the Lady Statesmen closer to achieving their goal. Shannon Feinman considers a larger team a strength and improvement from last year, because it adds more options to the bottom half of the starting lineup, which struggled with producing consistent results last season due to lack of depth.

This year’s team boasts 14 girls from eighth to twelfth grade. Six girls — one upperclassman, three underclassmen and two eighth graders — are replacing four of the girls who graduated or decided not to rejoin this season.

“The seniors strike a nice balance between supporting their teammates but also giving tough love when it’s needed,” Coach Feinman said. “(The seniors) push them to work harder and to be on time every day. They are the example of commitment to the team.”

Not only are the seniors committed to the betterment of the team, they are also equally committed to their academics. Along with their high school diplomas, all three seniors will graduate with an Associate of Arts and Science degree from Southside Virginia Community College due to their enrollment in specialized programs.

“We are trying to develop them into good tennis players, but even more importantly we are developing them into fine young women,” Coach Feinman said. “(The coaches) talk about how young ladies should support each other, build each other up and never tear each other down. They manage themselves really well, and we’re proud of that.”