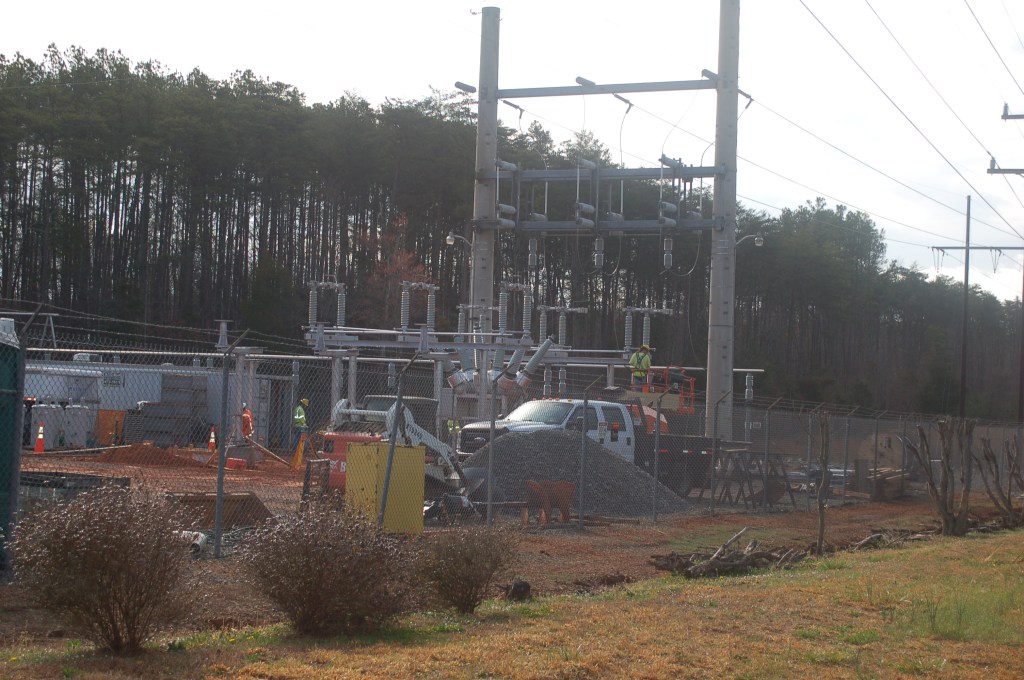 Holocene Clean Energy is looking to occupy 70.9 acres at the location of 1975 Highway Fifty-Nine in the Drakes Branch area near this transmission facility.

The Charlotte County Planning Commission voted to table any immediate decisions regarding a required conditional use permit for Holocene Clean Energy’s construction of a proposed 15 megawatt solar farm on Thursday.

In February, a proposed public hearing for the conditional use permit was postponed.

“This is Charlotte County’s first application for a utility-scale solar facility,” Elder said. “There are several issues related to the proposed project that the county would like to research further before moving forward with the public hearing. We are currently working with our attorney to address these issues.”

She said the planning commission wanted to meet to discuss some of the issues that had arisen.

According to Elder, the commission has up to 12 months to review the conditional use permit application. Additionally, the Charlotte County Board of Supervisors has at least one year to review the application as well.

“The county attorney has advised us that we take the time necessary to make sure that we’re looking at all the issues and what we’re doing is in the best interest of the citizens of Charlotte County,” she said.

The conditional use permit for the solar farm will set precedent as county officials are expecting additional applications.

The solar farm under consideration has a proposed location of 1975 Highway Fifty-Nine in the Drakes Branch area.

Elder said the Barnum’s sold their property to William J. Hall last Monday and only two property owners will be involved now.

“Whatever we decide about Holocene in Drakes Branch, we can’t change the rules for the next fellow that comes along,” said Dr. Nancy Carwile, who serves on the planning commission and board of supervisors.

Issues discussed during the planning commission meeting regarded the construction of the solar farm, revenue from the facility and decommissioning of the facility.

“We’ve got to make sure that we’re doing the right thing…,” said County Administrator R.B. Clark.

Elder said the county was previously looking at providing revenue in the form of pilot funds to the facility, however, County Attorney Russell Slayton advised that pilot funds do not apply for the specific project.

Elder said the county is looking into building permit fees, but there is no current direction.

“The decommissioning is one of the big pieces that we’re looking at,” Elder said. She said there is some concern about the cost of future clean-up if the facility were to become inactive or when it expends its normal lifespan.

According to Holocene Clean Energy’s CFO Stan Allison, “the modules themselves are guaranteed for 25 years, but often they’ll go 30-35 years. Even then, they’ll still be producing some power.”

Elder said the county is looking to see what other localities are doing that are in the same situation.

“Nobody seems to understand this well enough to enter into an agreement…,” said Clark, who said neighboring Mecklenburg County has hired a consultant to work on a report and will share the information with Charlotte officials.

Elder said the report will examine the economic impact of the facility.

“We were not aware of this restriction,” Allison said. “We stand willing to provide some other means to apply the amount of money … that we had planned on.”

Elder said when the meeting was scheduled the county was not aware that they had more time than anticipated.

“Let’s just see what the report says and come back,” said Clark.