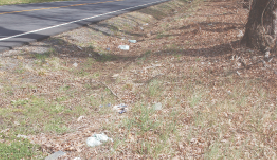 Litter is evident along Highway 59, a connector between Drakes Branch and Keysville.

As spring begins and warmer weather approaches the Heart of Virginia, an abundance of litter has recently been noticed on several highways and roads throughout Charlotte County.

“I had a citizen complain … or at least give constructive criticism about trash on the highway, said Drakes Branch Supervisor Garland Hamlett Jr. “He told me he went to an event at the community college … He said the trash on Highway 40 is atrocious. He said the county should really be embarrassed.”

Hamlett said on a recent trip to Keysville on Highway 59, he too noticed lots of litter along the roadway.

“We have a problem in the county with people who are irresponsible,” he said. “It’s embarrassing, I guess, when people tell you that in public.”

County Seat Supervisor Gary Walker agreed there’s a problem with litter on the roadways. “It’s not just our county, unfortunately. It seems to be a problem everywhere.”

Hamlett said if Charlotte County were to take charge, perhaps other counties would follow.

“I think the county needs to take a more proactive (and) aggressive stance on this,” he said.

“They had started on (Route) 40, and I don’t know whether the change in the weather (stopped them) or what (happened) …, Carwile said.”

She said Lockridge contacted the Virginia Department of Transportation (VDOT) about a section of roadway. Carwile said inmates from Piedmont Regional Jail handle trash pickup along that particular route.

“We do not have a VDOT crew that is specifically dedicated to trash pickup,” said VDOT spokeswoman Paula K. Jones. “Trash pickup is done as work and weather permits. I am not aware of any reports of trash along any particular routes.”

In an effort to help keep the county clean, towns in Charlotte are taking proactive measures. The town of Keysville will host a town trash pickup on Saturday starting at Tower Park.

“We generally focus on the area around downtown, but if we get enough people, we’ll spread out and hopefully get some of the side streets and along the railroad tracks,” said Town Council Member Sarah Critzer. “Hill Avenue is a mess.”

“I know some is accidental, but not all. It would be nice to see people take pride in their community and pick up trash when they can,” she said.