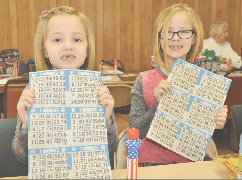 More than 170 people packed the Bacon District Volunteer Fire Department on Sunday to support the Barksdale Cancer Foundation during its annual bingo event, one that raises thousands of dollars for the group, which supports those battling cancer in Charlotte County. Sisters Finley, left, and Fallon Grooms proudly display their bingo cards. See more photos online at www.TheCharlotteGazette.com.

“This is the eighth one that we’ve had,” said Wendy Lankford, the president of the foundation — an organization formed after three members of the Barksdale family died from cancer in a short time span.

“Right now, we’ve got like five applicants,” Lankford explained of cancer patients seeking assistance. “We don’t get one applicant at a time, we get three, four, five. We added three people last week to our prayer list at church with stage four lung cancer — two of them were from Charlotte County.”

Lankford’s mother is a Barksdale. “My mother has pancreatic cancer right now. She’s probably on the downside of that.”

Pat Barksdale Harding, a founding member of the foundation, said the group received its 501c3 status in 1998.

“It was started, really, in the mid 90s … We lost three members of our family to cancer within a period of four years.”

“We found out that our holidays just weren’t the same,” she said. “So, we started just getting together and bringing our homemade items. We would sell them.”

“Once you lose that many people, it does something to you,” Harding said. “You realize that material stuff is nothing. And, so we got to where we were raising $2-3,000 just in the family unit.”

Harding comes from a large family of seven siblings.

“Knowing what their struggles were is what made the Barksdales decide (to do this),” Lankford said. “What we did the first two years is … everybody would make stuff and we’d have an auction every year at Christmas.”

Lankford had a rare form of cancer in her mouth, she said, and has been cancer free for nine years.

“There’s not a lot of places around here,” she said of centers for treatment. “We also do gas cards,” Lankford added. “We do wigs, we do caps, we do information packets for that type of cancer. Our information comes from VCU,” she said. “We have little comfort bags that churches make.”