A lasting memorial for ‘Cotton’ 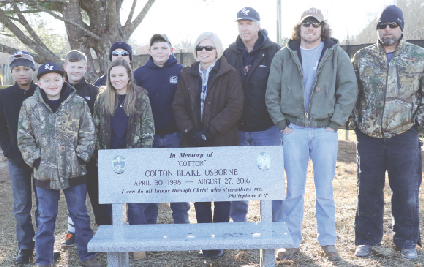 All who pass through the front gate of Bankston Field at Randolph-Henry High School will now be greeted by a permanent memorial to Colton “Cotton” Osborne.

The Charlotte County Patriots varsity football team, which plays in the Charlotte County Youth Football League, dedicated an ornate bench to the Randolph-Henry athletic department in Osborne’s honor during a brief ceremony just prior to the start of the Statesmen’s 2017 varsity baseball season Thursday.

Osborne was a former Patriot and Statesman, a multi- sport athlete who graduated from Randolph-Henry in May 2016. He died in an all-terrain vehicle crash on Aug. 27.

Gathering for the dedication ceremony Thursday was a crowd that included current and former Patriots and Statesmen, coaches, parents, the visiting Bluestone High School varsity baseball team and Osborne’s family — his father, Eddie, his mother, Teresa, and his older brother, Dylan.

“It’s very humbling,” Eddie Osborne said of the memorial in honor of his son. “So much has happened. It’s been so many good things done in his honor, it’s just very humbling.”

Sitting on a granite base, the concrete bench has inscriptions in front and back, with two color photos of Osborne in front, one of him from his Patriot playing days. In front, the bench reads, “In Memory of ‘Cotton,’” listing Osborne’s full name, his dates of birth and death and Philippians 4:13, which reads, “I can do all things through Christ who strengthens me.”

“It’s breathtaking,” Teresa Osborne said of the bench. “It means a lot to us that they did this.”

The speech read as follows: “Today we come together to dedicate this memorial bench to Randolph-Henry’s athletic department in memory of a fellow Patriot, Colton Osborne, better known as Cotton. After Cotton’s passing, the varsity Patriots placed the number 2 on our helmets and played for Cotton. We played with heart and as a team and went out and beat teams we had never beat before. It may have been 11 of us on the field, but it sure felt like 12. We knew Cotton was playing with us. Colton was a great athlete, and we all looked up to him. We knew we had to do something to carry on his memory, and we knew a memorial bench would be perfect.”

Caleb noted that several fundraisers took place, “such as during our homecoming game, we sold snow cones, tattoos, baked goods, held a 50/50 drawing and a dance with raffles was held.”

On behalf of the Patriots, he thanked everyone for helping them reach their monetary goal to create the bench.

Caleb closed his speech by referencing Osborne again, saying, “This fellow Patriot was so amazing, he got chosen to play ball on God’s Team.”

Osborne’s parents estimated that he played for the Patriots for four to five years, from ages 9 to 13, but he maintained a connection to the Charlotte County Patriots even after that.

After the ceremony, Caleb, who grew up around Osborne, shared that Colton was an important part of everybody’s lives in the area.

“Everybody knew him,” he said. “Just everybody wanted to have a friend like Colton. And all us boys on the Patriots team, we looked up to Colton as like a leader and a friend and all. We just all wanted to be just like him when we got older and play baseball up here, football, sports.”

One of the Patriots varsity team coaches, David Locey, pointed to the mothers and grandmothers of the Patriots players as the driving forces behind making the memorial bench a reality.

“They’re just awesome ladies, and they kind of drive us men, but they step up and point us in a direction and then we jump in and help,” he said. “It’s the ladies and the grandmas in the league that have worked very hard to put this together and felt it was important to do.”

Randolph-Henry Head Varsity Baseball Coach J.R. Allen, who also spoke at the ceremony, said it is a tremendous honor to have the bench at Bankston Field.

“Colton was a stellar person,” Allen said. “He was a great teammate. The game of baseball was his passion, so to have it here, this is just fantastic. To have that bench (as) something our guys can see every day we come to practice, (it’ll) give us a little extra momentum to work a little bit harder. That bench is going to be good for us.”

Allen, who coached Osborne, presented Eddie and Teresa Osborne with Colton’s No. 2 baseball jersey in an enclosed frame during the ceremony.