Senior takeaways from the mat 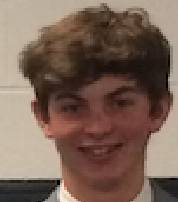 Randolph-Henry High School’s varsity wrestling team loses six key members to graduation this year, but but both they and the program have emerged as winners for having been associated with each other.

“Our six seniors have been extremely important to this team’s success and will be sorely missed,” Schwartz said in a previous interview. “However, they are leaving the team in a lot better place.”

They helped the Statesmen place second in the Quad Rivers Conference 34 tournament and seventh out of 22 teams in the Region 2A East tournament.

Each senior recently took a moment to share a quote conveying an inspirational thought or a lesson they have learned, and they also communicated their future plans.

“Wrestling has been a great experience,” Walker said. “I learned so much from my coaches and my teammates. It taught me to be self-disciplined and never give up.”

Walker, who won his weight class at the conference tournament, plans to attend college, but he has not decided which one yet.

“The only way to be the best is to work with the best,” Tharpe said.

A second-place finisher in his weight class at the conference tournament, Tharpe plans to attend Southside Virginia Community College before transferring to Longwood University to major in criminal justice.

Spencer Parrish said, “When you love wrestling, there are no obstacles, just opportunities.”

Parrish was conference champion in his weight class and placed fifth in the regional tourney. He plans to attend Hampden-Sydney College to study history with the goal of becoming a teacher and a coach.

Michael Nichols won his weight class at the conference tourney, and his quote shed light on what made that victory possible.

He plans to play some sports and study to become an athletic trainer during his time at Averett University.

Morton’s quote reflected the indomitable spirit that wrestlers cultivate to be successful.

“Don’t tell me the sky’s the limit when there’s footprints on the moon,” he said.

He earned second place in his weight class at the conference tournament.

He plans to join Air Force Reserve and then go to college to study marketing.

Christopher Nichols said, “Wrestling has taught me a lot of life lessons, and I love everything about it. I love the hard work and the tough battles on the mat. I love pushing myself past my limits every day. I love seeing myself improve every time I wrestle.”

He not only placed fifth in the region but won his weight class in the conference tourney.

In the fall, he will begin attending Ferrum College where he will study physical therapy and continue wrestling.

“Wrestling has made me a better person, and the lessons I learned from it will be with me forever,” he said.