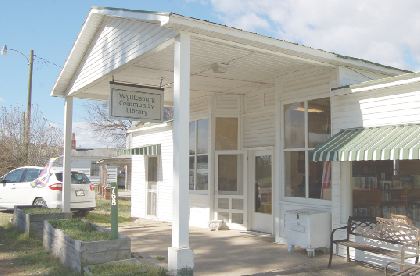 The Wylliesburg Branch of the Charlotte County Public Library is in its 16th year of operation since expanding its space.

“That building was — you could guess where it dates from the 40s or 50s maybe,” said Charlotte County Library Director Jim Watkins. “It used to be a gas station, a general store and post office all in one. The area that used to be the tiny post office, I remember the square footage, it’s less than 200 (square) feet,” Watkins said.

Watkins said the library had been in the tiny space until the library board reached an agreement with the owner of the building to lease the entire space.

“The Wylliesburg Library Committee from down in that community helped,” Watkins said. “We raised around $70,000 to renovate the exterior and the interior of that building. The carpeting, lights, all new finishes, shelving furniture — and it’s a beautiful little library now.”

Watkins said prior to the expansion, the rest of the building was used mainly for storage.

Wylliesburg Branch Librarian Crystal Vaughn remembers attending the smaller outfitted library when she was a child.

“I was about 4 or 5 or something like that, and my sisters and I would come in — I think my mom brought us every Saturday — and we’d come in and get just arm loads of books and take them out,” Vaughn said.

She said the library then had all the adult and children’s books in one area and — although they did have shelves — they stacked lots of books against and around the desk, as well as against the walls.

This year, Vaughn has led a reading program on behalf of the library with students from Bacon District Elementary School on the second Wednesday of every month — something that ended last week.

Watkins said the Wylliesburg branch was the only one out of the four branches to have held reading programs during the school year.

Speaking of other branches of the Charlotte County Public Library, Watkins said the county was unique to have so many branches, given that it only has a population of about 12,000.

“The reason that has worked is that the local communities have been interested enough to make it happen. In Keysville, the town owns the building; (the) same thing with the town of Phenix,” Watkins said.

“Wylliesburg does not have a town government like the other two do, so it’s been a group of interested citizens there to raise the money and to keep the interest up.”

“We offer a lot,” Watkins said of the library, citing four public access computers available at the branch, as well as books on CD and online eBooks. He said the 24/7 wireless internet was one of the biggest uses at the library.

“You drive by there at night and you’ll usually see cars parked right out front of the library because it’s the only public wi-fi signal available out there,” Watkins said.