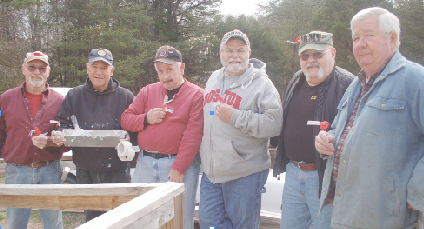 Members from VFW Post 8902, VFW Post 9954 and American Legion 147 came together on Feb. 14 as a part of their Buddy Poppy Program to make repairs to the home of a Charlotte Court House veteran. Pictured are, from left, Tom Hines, Tom Hart, Claude Tomlinson, Garland H. Hamlett Jr., Ken Porter and Donald Westerlund.

A collaborative effort between Veterans of Foreign Wars (VFW) and American Legion members have resulted in repairs of a home for an elderly Charlotte Court House couple.

Veteran Jack Layne and his wife, Elizabeth, were chosen to receive the repairs based on a coordinated effort with the Piedmont Area Veterans Council (PAVC).

“The Layne family was referred to us by one of our community partners,” said PAVC’s Founder Sarah Dunn. “They are a wonderful family who agreed to allow us to provide the public with their contact information. Charlotte County Veteran Butch Hamlett and several VFW members (fellow veterans) have already donated time (and) supplies to do some of the repairs needed on the inside of the home.”

According to Dunn, volunteer organizers still need assistance “with repairs to the kitchen floor, a wall in the bathroom potentially needs to be moved back to allow wheelchair accessibility and a handicap shower/pedestal sink installed.”

She said after the interior repairs are completed, the outside of the home will need to be painted.

The PAVC is a volunteer organization that serves the counties of Charlotte, Amelia, Buckingham, Cumberland, Lunenburg, Nottoway and Prince Edward.

Dunn said the organization consists of veterans, active duty military and anyone who wants to support veterans.

The idea behind the organization is that referrals can be made for individuals or families in need. “Our board members validate the need and we begin to network with all community partners while researching state, federal and national programs that may also assist with the need,” Dunn said.

After the need is verified, an email is sent asking for community engagement with the identified need, Dunn said.

According to Garland H. Hamlett Jr., a member of VFW Post 8902 of Keysville, the repairs were made as a part of the VFW’s Buddy Poppy program.

Under the Buddy Poppy Program, “post proceeds must be used for the ‘assistance of needy veterans and members of the Armed Forces and their dependents, widows and orphans,’” officials said on the VFW’s website.

Typically, a contribution is given in exchange for the Buddy Poppy.

All posts are encouraged to participate in the program at least once a year, officials said on the website.

Victoria VFW Post 9954’s Tom Hines said “proceeds from local contributions that we collect while handing out poppies stays in our local post area. It’s important for the veterans and general public to know where the donations we collect are used. All VFW Posts volunteer in their local areas, and there is no better feeling than to help a fellow veteran and their family.”

Hamlett said some of the repairs performed by veterans included patching holes in the walls, new sheetrock and fixing up the bathroom area.

Contractors are set to perform estimates in the bathroom to facilitate other needed repairs.

“Veterans sometimes are forgotten, and we, as members of the Veterans of Foreign Wars, are dedicated to taking care of our own,” Hamlett said.

Members from Keysville VFW Post 8902, Victoria VFW Post 9954 and American Legion 147 were on hand to help with the repairs last week.

“It is truly about veterans helping veterans and living up to the VFW’s motto of ‘Honor the Dead by Helping the Living,’” Westerlund said.

For more information about PAVC, or to be added to their email distribution list, email pavc23901@aol.com.