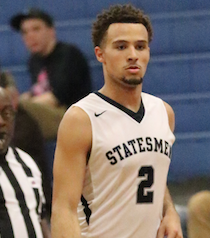 Randolph-Henry High School junior guard/forward Tremaine Pugh was voted to the 2016-17 All-Quad Rivers Conference 34 first team by the coaches in the conference.

Only a first team was selected, and it is composed of only eight players.

“I think he’s deserving of it,” Statesmen Head Coach James Graves said of Pugh’s accolade. “He was one of the better players in the conference, I think, and we had a good conference. …  We may have been one of the tougher conferences.”

Pugh produced some 30-point games and demonstrated an ability at times to dominate a game.

“He’s the guy that other teams know that we’re going to go to in a clutch situation,” Graves said, noting he thought Pugh was well-respected by the other coaches.

Pugh averaged 16.1 points per game, a mark that was second-best in the conference, and he shot 74 percent from the free throw line.

He averaged 6.1 rebounds per game, “which is pretty good considering he played guard and small forward most of the time,” Graves said.

Last year, he made the first team in Courthouse Conference 37.