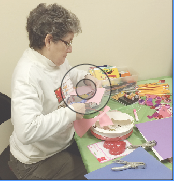 Deborah Kennedy, director of the Drakes Branch Museum, joins in the fun and sits down to craft a Valentine of her own.

Children and enthusiastic adults alike were invited to visit the Drakes Branch Museum on Saturday to craft Valentine’s Day cards and learn about the history of Charlotte County. The event, which ran from 10 a.m.-noon, didn’t have a large turnout, but those who attended left with big smiles and beribboned Valentines.

“A lot of people don’t know the museum exists,” said Bea Adams King, who has worked with the Charlotte County Historical and Genealogical Society for a year now, “but Deborah’s the director, and she’s done a great job of putting artifacts together of Charlotte County.” 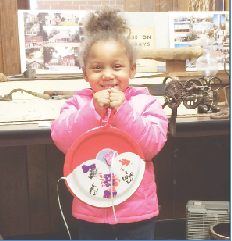 The Drakes Branch Museum, which works alongside the Historical Society, was first put together in 2003 by Deborah Kennedy.

According to Kennedy, when the museum first opened, it only had a few displays. Since then, the museum has expanded as Kennedy and the Historical Society have amassed more and more artifacts.

The museum building, which was built in 1898, was originally the Bank of Chase City before it was donated to Drakes Branch.

Pattie Callaham, Alexis Roberts, and her daughter Peyton Roberts — all residents of Drakes Branch — were among the first visitors to arrive at the event. While Alexis and Peyton snipped at blue and pink hearts, Callaham was delighted to reminisce as she stumbled upon a seemingly ordinary bushel of dried tobacco. It reminded her of tying tobacco to a stick as a child.

“Don’t throw stuff away,” said King, “Donate it to either one of us. What you think is junk … (Callaham) came in and picked up that tobacco; it brought back so many memories for her.”

According to King, the organizations have been attracting primarily 20- to 30-year-olds, but they’re hoping to draw in the older generations as well.

“I wish we could get some of the older generation to come in and volunteer … They probably know just as much as we do about what’s in here, I’m sure,” said King.

Both the museum and the historical society offer free genealogy analyses. King and Kennedy help people from all over the United States discover the history of their pasts.

“If you don’t know where you came from, you don’t know where you’re going,” said Kennedy. Growing up in an old antebellum house, Kennedy has been collecting artifacts since she was a child. Many of the bottles on display in the museum are ones Kennedy has collected in the pastures surrounding her childhood home. According to King, some of what seem like regular glass bottles are extremely rare and cost from $15-$20.

The museum, which has free admission, relies on the patronage of the Charlotte community. With more volunteers, they would be able to stay open for longer hours throughout the week.

Their next planned event is a basket weaving workshop around Easter time, with a planned guest appearance from the Easter bunny. 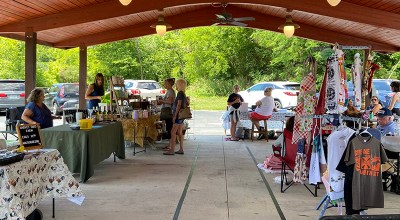