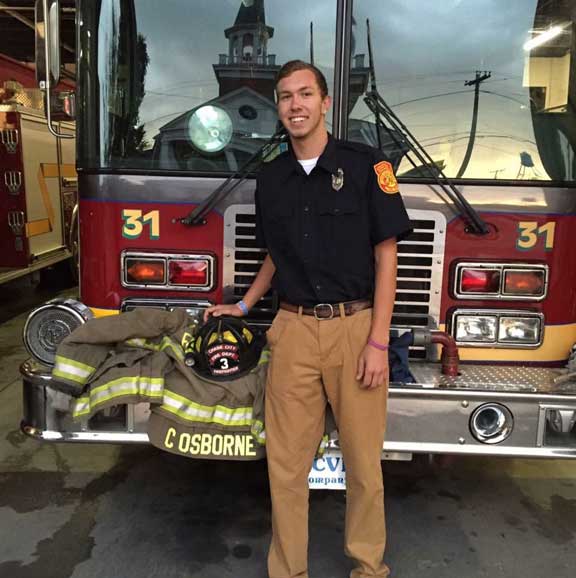 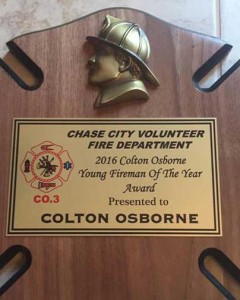 The CCVFD named the late Colton Osborne its “Young Fireman of the Year” for his service with the department during its annual banquet on Dec. 10. His parents, Eddie and Teresa Osborne, and brother, Dylan Osborne, attended the ceremony to accept the award in his memory.

The 18-year-old, from Wylliesburg, died Aug. 28 in an all-terrain vehicle accident. Colton, a Randolph-Henry High School (R-HHS) alumnus, has been remembered as a firefighter, a multisport athlete and a “great guy.”

Colton’s dedication to the fire department was solidified with this recent honor. When his family received the invitation to the banquet they didn’t know why they were invited.

“They were doing something for Colton that he deserved and they wanted us to accept it,” Teresa said. “We did not have a clue what kind of an award he was getting.”

The family attended the event, ate a hot meal and watched as awards were given out, according to Teresa.

“The chief went up and started speaking, and I knew exactly who he was talking about,” she said.

Teresa said Chief Jonathan Ligon described the young man receiving the award as someone who was dedicated and spent his free time helping out wherever needed at the fire department. Ligon said he knew whatever he asked Colton to do would be done and done correctly.

“Tears started flowing for me because I knew whatever this award was it was for Colton,” said Teresa. “He spoke a little more on Colton and then presented us the award.”

She said it was an “amazing honor” to accept the award on Colton’s behalf.

“At the end of the ceremony they had a video of different fires they had went to that year and at the end of the video was all memories of Colton through the year,” she said. “It was very touching to us.”

This was not the first time the community has remembered Colton. A ceremony was held at R-HHS in September during a football game. A giant “2” — Colton’s jersey number in football and baseball — was painted in the middle of the Bankston Field gridiron on the 50-yard line, in his memory.

About 340 people, athletes and family members gathered around the “2” just before the game to remember their friend, which included Eddie and Teresa being presented with their son’s No. 2 football jersey and a performance by the school choir.

Another memorial that remains in the community is a hazardous materials (HazMat) trailer owned by the Bacon District Volunteer Fire Department. Money donated in Colton’s name helped equip the trailer with the finishing touches it needed to pass inspection.

The department added a decal which states, “In memory of Colton Osborne” to the front of the trailer to honor their fellow fireman’s life.

“Colton was a special kind of person (who) touched everyone’s heart that he met. He is truly missed by his family and his fire department family as well,” Teresa said.