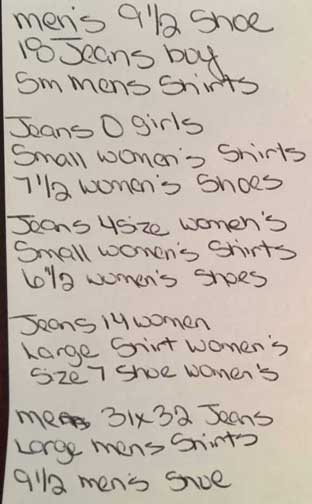 Pam and Warren Weston, of Weston Grocery, posted this list of clothing for the community to donate to the Loveday family, who lost their home in a Nov. 27 fire.

Folks in the Red Oak community have come together to help a family in need.

On Nov. 27, the Sunday after Thanksgiving, fire destroyed the Loveday home on Barnesville Highway (U.S. 15). The Lovedays — a family of five including two daughters, one in sixth grade and the other in high school, and a seventh grade son — reportedly lost everything.

Within days, the community responded, led to some degree by Pam and Warren Weston, owners of Weston’s Grocery. On the store’s official Facebook page, the Westons posted a note which, in part, said, “With Christmas coming, let’s band together and help make the most out of Christmas, especially for the children … let’s see if we can brighten the holidays a little bit for them.”

The post also included a picture of a list of shoes, jeans and shirts in their needed sizes, with a goal of making a delivery on Dec. 20.

As it turned out, Weston said his wife had already been dropping things off to the Lovedays for several weeks.

“She’s not the only one,” Weston said. “There’s been a large group of people helping from Charlotte and Mecklenburg counties. It’s mainly clothes that they can use.”

Weston’s Grocery is also where, several years ago, the “Brotherhood” began meeting.

“Our little brotherhood meets on Sunday,” Warren Weston said. “It’s a bunch of guys, some of whom don’t go to church, who try to help people throughout the community.”

He said the Brotherhood, which is affiliated with nearby Antioch Baptist Church, raised $300 for the Lovedays, who Weston said live four or five miles south of the store.