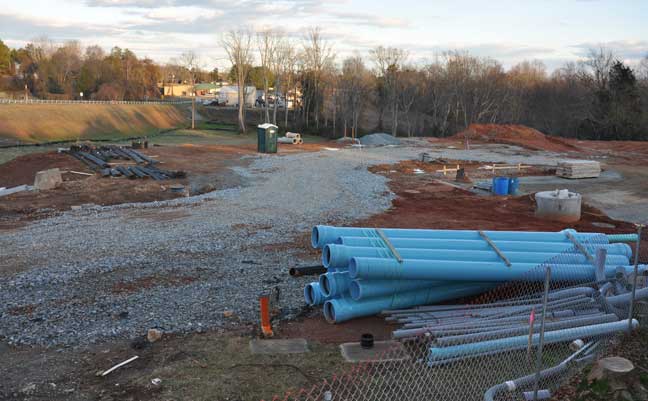 The $13.9 million courthouse addition project in Charlotte County is progressing well, according to project leaders.

Skanska USA was on site the week of Dec. 19 “to observe work in progress. Final approval from (the Virginia Department of Environmental Quality) regarding the site design changes is pending and is expected shortly,” project management team members said in a recent report issued to the county.

Supervisors hired Skanska USA in March for $260,000 to oversee the project. Blair Construction is the project’s general contractor.

The vehicular entrance and exit to the complex will be one way, per the Virginia Department of Transportation.

According to the latest report, Blair dug, installed rebar and poured a footer along the west side column line during the week of Dec. 19.

“They also received two loads of rebar,” project leaders said in the report. “Blair installed some temporary piping on downspouts to aid in removing water from the building pad at the clerk’s office. Blair had the building pad rerolled to seal off before rain over the weekend.”

The contractor has laid out the next section of footers “so they can continue to work on footers next week when they return from Christmas break. CBR Electrical was on site one day and installed tops on pull boxes. Dunavant installed storm water piping and structures and tied in 10-inch storm line that previously ran through site,” project leaders said in the report.

The engineering firm of Hurt and Proffitt was also on site recently, observing work, looking at rebar, footers, testing concrete and soil compaction on the stormwater trench backfill.

According to the report, during the week of Dec. 26, Blair continued to install footers while work continued on stormwater installation.