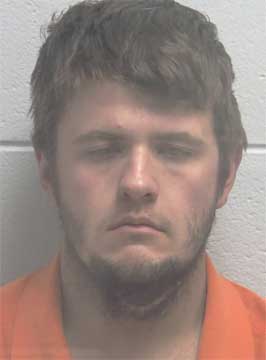 A 22-year-old Green Bay man is charged in connection with a string of logging equipment thefts, including from a company based in Keysville.

According to the Nottoway County Sheriff’s Office, deputies arrested Samuel Lee Hall on Thursday and charged him with three counts of grand larceny. Two charges are for the stealing of a trailer and logs and one for stealing a log trailer, according to an email from Nottoway Sheriff Larry Parrish.

Deputies charged Hall with stealing a logging trailer and logs belonging to Wilkerson Trucking, of Keysville, from a parked location off Cox Road outside Blackstone.

Parrish said Hall is also charged with the theft of a logging trailer and logs belonging to B&J Trucking Inc., of Victoria, on Dec. 9 from a Blackstone-area parking lot.

Hall is charged with stealing a log trailer parked off Rocky Bump Road, also outside Blackstone.

All three log trailers have been recovered, according to the sheriff’s office.

Hall is being held without bond at Piedmont Regional Jail in Farmville. According to online court records, he is to be arraigned in Nottoway County General District Court on three grand larceny charges at 10:30 a.m. Wednesday, Jan. 4. He is also scheduled to appear in Nottoway at 10:45 a.m. March 29 for a preliminary hearing continued from Dec. 21 on a charge of buying or receiving stolen goods, two counts of possession of Schedule I or II drugs and a charge of failing to appear.