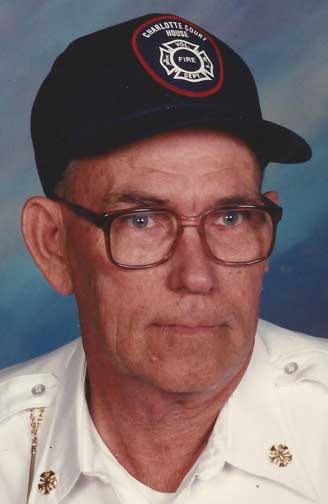 “Ed has worked for the town waterworks for years in Charlotte Court House,” said family member and Emergency Medical Technician Larry Newcomb. “He worked in construction and built the big bridge in Narrows.”

Newcomb said Stanley was familiar with every water pipe within town, and could offer specific expertise on pipes buried more than 30 years.

Newcomb said Stanley was a school bus driver for more than 30 years and was the longest serving fire chief in Virginia with 46 years. He served as fire chief of the Charlotte Court House Fire and Rescue.

In addition, Stanley was employed at West Point Steven’s in Drakes Branch for over 20 years, according to Newcomb.

“Stanley was the type of person you could learn a lot from by just listening to him,” said Drakes Branch Volunteer Fire Department Chief Kenny Tharpe. “He taught many people not only firefighting skills, but most importantly he taught us how to treat people. He will be missed.”

A memorial for Stanley was recently held at the Charlotte Court House Fire Station with a final call for “Charlotte 40,” Stanley’s badge number.

“He’s always been there for us and it’s still hard to believe he’s gone,” said Newcomb. “He was always there to help anyone in need and he believed in the good of people.”

According to Stanley’s obituary, he is preceded in death by his wife, Mary R. Stanley. “Ed is survived by a daughter, Mary Helen Freeze, a son, James Edward Stanley Jr., three grandchildren, Gina Newcomb, Jennifer Freeze and Brian Freeze and seven great grandchildren.”

A funeral service was held for Stanley on Dec. 6 at Mt. Harmony United Methodist Church.