From small town to TV set 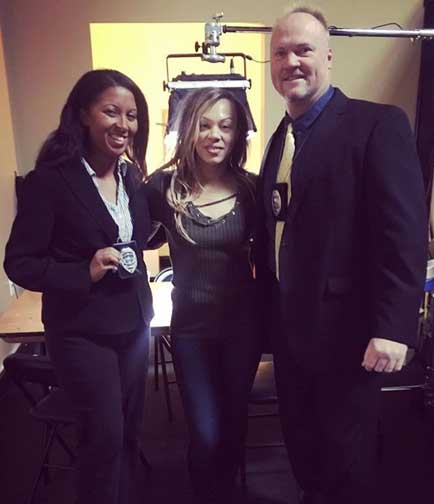 Italia Gregory, center, stands with actress Leslie Barnett and actor Scott Swope on the set of “For My Man,” a true-crime reenactment show in which all three actors starred.

The Charlotte Gazette’s own community editor took a break from covering events to reenacting a true crime for national television.

Italia Gregory learned she had been chosen to play the lead role in an episode of “For My Man” two weeks ago, just five days before filming began. 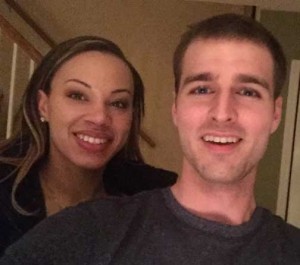 The 27-year-old said she didn’t think too much about her initial audition back in November until they called her to submit some scenes of her in the role she would be playing if chosen.

“During the audition process, I was required to submit a headshot, along with various other full length shots,” Gregory explained, adding she had found the casting list online through the production company’s website.

The actual filming of the show took place last week in Maryland. Gregory took a break from her responsibilities in the office to bring to life the crimes of Kumari Fulbright.

The show shares the stories of women who have been arrested for a crime they did “in the name of love,” according to the series website. Each episode features two different true stories of crimes committed by a women to either avenge or save a significant other, often ending with the incarceration of the lead character.

“Playing the lead was a pretty intense process,” said Gregory. “I typically pulled 10-12 hours shooting days all week and there wasn’t much downtime for my character since she was a major part of the story.”

Gregory said she had to look very similar to Fulbright for her role. Some of her scenes required a lot of physical work such as running, simulated fighting and withstanding freezing temperatures.

Gregory said the episode she stars in follows the crimes Fulbright committed against her boyfriend.

The law school student and beauty queen was jailed for having her ex-boyfriend kidnapped and tortured. Gregory said Fulbright tortured the ex-boyfriend along with another former boyfriend.

“The whole premise for the kidnapping was surrounding stolen jewelry … which Fulbright’s ex-boyfriend was accused of taking from her,” said Gregory.

“There was usually only one or two minutes in between scenes to completely change into a new outfit, apply new makeup and a new hairstyle,” she said.

Because everything had to stay on schedule, there wasn’t a lot of time for deliberation.

Most of the scenes were filmed at least three times so cameramen could capture different angles and shots, Gregory said.

“The hardest part of doing the show was surely the long hours and the pace at which you move all day,” she said, noting that at the end of each hard day she felt accomplished and one step closer to the finished product.

Gregory enjoyed getting to meet a variety of actors and actresses from all different walks of life.

“There wasn’t a whole lot of time to get comfortable, I just had to jump right in and get to it. I think the people I worked with made that part easy though,” she said.

Gregory said she would love to act in another true crime television series.

“In my opinion, it’s a unique genre that captivates the audience since all of the stories are real life incidents that have occurred,” she said.

The episode will air on TV One on March 10.