The Virginia Economic Developers Association (VEDA) has awarded Virginia Sen. Frank M. Ruff Jr. (15th Senate District) its seventh annual Legislator of the Year Award. The award was created to honor legislators who serve as ambassadors for economic and community development in Virginia. 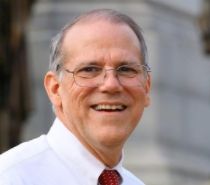 “During the most recent General Assembly session, Sen. Ruff has been an integral part of significant economic development legislation including creating an exemption for certain data centers under the Retail Sales and Use Tax legislation; the establishment of the Virginia Collaborative Economic Development Act; and creating funding for and establishing the New Economy Workforce Credential Grant Program,” said Barker.

VEDA’s leadership put the Legislator of the Year Award in place to recognize public officials who not only support economic and community development, but who are actively engaged in public policy efforts that advance economic prosperity in the commonwealth. The 2016 award was presented to Ruff at VEDA’s Annual Meeting in Richmond on Nov. 30th.