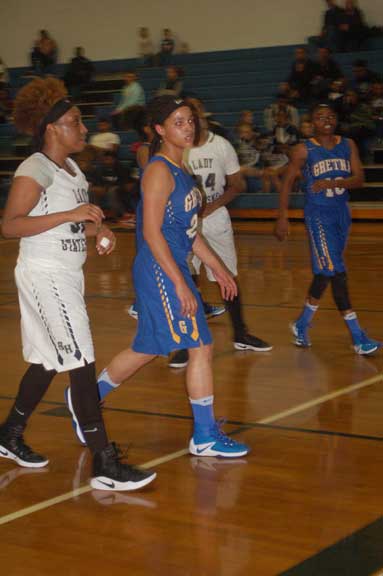 Randolph-Henry’s Jayka Pettus, far left, competes during the first week of the 2016-17 season.

The Randolph-Henry High School varsity girls basketball team has exhibited heart to start the 2016-17 season despite having an 0-3 record.

The Lady Statesmen fell 38-28 to visiting Bluestone High School on Friday in their second game of the year, but their head coach, D.J. Jack, said he was excited with their play.

“We played hard from the jump ball at the beginning of the game until the final buzzer went off at the end of the game,” he said. “They came out and played with a lot of heart and confidence.”

R-H trailed 12-6 after the first quarter and 20-12 at halftime. The Lady Statesmen outscored Bluestone 9-6 in the third quarter, making the score 26-21.

“In the fourth quarter, we just lost our legs and could not get any shots to fall or connect on our free throws,” Jack said.

Randolph-Henry shot 11-for-51, or 21 percent, which was an improvement from 7-percent shooting in its game Wednesday evening. The Lady Statesmen were also 6-for-22 from the line against the Lady Barons, or 27 percent.

Leading R-H in scoring were Teyha Pugh, with 11 points, Tajalin Arvin-Watson, with 10 points, and Tori Washington, with seven points.

Though the Lady Statesmen went 0-3 in their first week, Jack saw good reason to be encouraged.

“They are improving every time they step on the floor, and that tells me that they are buying into what we need to do to be successful,” he said.