The pride of Southside 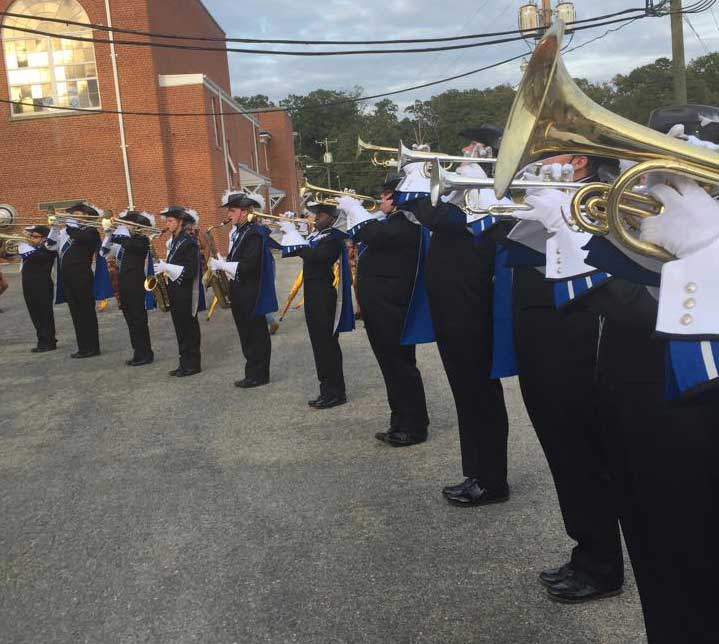 A photograph from the Randolph-Henry Marching Statesmen’s Facebook page in September. The marching band has an outstanding performance record and is gaining enthusiastic fans on Facebook.

The Randolph-Henry Marching Statesmen have been catching the attention of fans lately due to their outstanding performance record.

“I am so very proud of the marching band for their outstanding performances. The high caliber of music that they play and the complicated routines that they perform are really extraordinary,” said Superintendent of Charlotte County Schools Nancy Leonard. “The students and Mr. Ramsey are so dedicated and work so hard all year, including during the summer heat, to put on these spectacular shows.”

According to Director of Bands Derek Ramsey, there are 50 students in the marching band program this year.

“This year, our show is called Gladiator,” Ramsey said. “It was music from the movie Gladiator.”

He said some of the tunes from the show include soundtracks such as The Barbarian Hoard and The Battle.

While the band has a strong competition record, they are also known throughout the community for their participation in local parades, football games and pep rallies.

The Marching Statesmen have been under the direction of Ramsey since the 2010-11 school year.

Since taking on the role, Ramsey said he has noticed an increase in musicianship and enrollment numbers have gone up.

“We have earned four Virginia Honor Band Titles,” said Ramsey. “That is the highest honor you can receive from the state. That comes from superior ratings.”

He said this includes the Marching Band as well as the Concert Band program at the high school. In addition, he said the band has won a total of five grand champion trophies in the past three years at various competitions.

“The kids are kind of the hardest working kids around,” Ramsey said. “These accomplishments they’ve made, they don’t come easy and they’ve worked for everything that they receive so far. I’m really looking forward to seeing how far they grow.”

There are also a little more than 100 middle school students in its program, which Ramsey anticipates will translate to higher numbers in the future for the high school.

He also said there are several dedicated individuals working behind the scenes in order to help facilitate the band program’s success.

“The parents and the Band Boosters are a part of the marching band’s success as well,” Superintendent Leonard said. “To achieve that kind of award winning performances, it has to be a community commitment. I am seeing students becoming interested in participating in band at an early age and our band program is growing. I do believe it is because of elementary and middle school students seeing the Marching Statesmen perform. It is inspiring to see and hear and the Marching Statesmen are a real point of pride for Charlotte County Public Schools.”