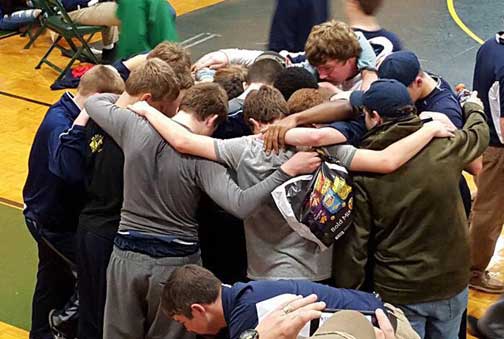 The Randolph-Henry High School varsity wrestling team is coming together and applying a strong work ethic in preparation for the 2016-17 season.

Randolph-Henry High School fields a senior-laden varsity wrestling squad this season that has lost some key contributors but expects to make an impact at the conference, district, regional and state levels.

“We should have around four wrestlers place in the region and qualify for the state tournament,” Statesmen Head Coach Dean Schwartz said.

The Statesmen went 4-6 in dual meets last season, but they had four James River District individual champions, three of whom are returning for the 2016-17 campaign.

Nichols was also the sub-regional runner-up, placed third in the 2A West Region and placed sixth in the Virginia High School League Group 2A state tournament.

Chester has transferred to a school in Raleigh, N.C., and the Statesmen also lost Johnathan Morton to a concussion injury.

“Johnathan Morton was/is the heart of the team,” Schwartz said. “He’s always been the hardest worker and a great teammate. His contribution on the mat will be missed, but we are happy to have his positive attitude and strong work ethic helping the team in other ways.”

Randolph-Henry, having developed nicely last season, features seven seniors this year, along with six freshmen, two sophomores and one junior.

Leading the way for the Statesmen will be Nichols, the school’s only 4-year varsity wrestler who has put himself in a position to wrestle in college and will announce his selection in January.

Senior Michael Nichols is only a second-year wrestler but has already earned a leadership role on the team.

Spencer Parrish is sidelined by injury but is expected to generate a lot of wins when he returns.

Freshman Danny Parrish placed fourth in the middle school state tournament last year and has worked hard during the offseason, making him a wrestler to watch.