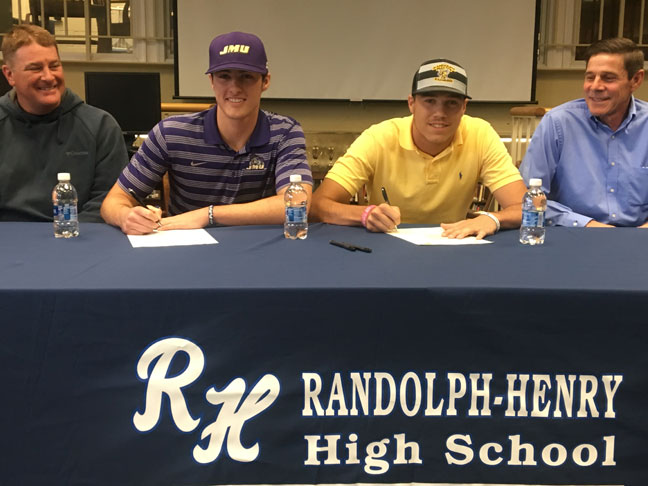 Randolph-Henry seniors Raleigh Duffer and Josh Jones formally announced the next chapter of their baseball careers during a signing ceremony on Nov. 9 in the Randolph-Henry High School library.

Jones has received a partial athletic scholarship to play for James Madison University (JMU), while Duffer has an academic scholarship and a guaranteed roster spot with Randolph-Macon College.

“I was very excited for the two of them,” Statesmen Head Baseball Coach J.R. Allen said. “This is a big deal. These guys have worked really hard to get to this point, so I was really happy for them.”

Jones said signing with JMU was really special for him.

He said he did not have any other offers, but he had interest from several other notable schools, including Old Dominion University, Virginia Tech, Virginia Commonwealth University and Radford University.

JMU was his clear No. 1 choice, though.

“My sister had gone there, and I just loved the campus,” he said. “The atmosphere was just on a whole other level.”

He will be joining a former Statesmen teammate there, Cameron Vassar.

Jones, who will be a four-year letterman in baseball at R-H, verbally committed to JMU last fall after having been scouted at shortstop.

“He’ll bring a strong bat (to the Dukes),” Allen said. “He’s a pretty good middle infielder, so he’ll bring a good defensive presence to the team.”

Duffer said it meant a lot to have the opportunity to play for Randolph-Macon coming from a small school like Randolph-Henry.

He expects the Yellow Jackets to utilize him as a reliever on the mound.

“I had two other schools that were interested in me for baseball, and it honestly just came down to which one felt more like home, which was Randolph-Macon,” he said.

The other schools were Marymount University and Bridgewater College.

“I never really liked the mountains where Bridgewater is, and Marymount was kind of too much in the city for me coming from a small rural area, and Macon’s kind of like that perfect fit.”

Allen said Duffer, who will be a third-year letterman in baseball at R-H, will give the Yellow Jackets a really good pitcher.