Free pantry for those in need 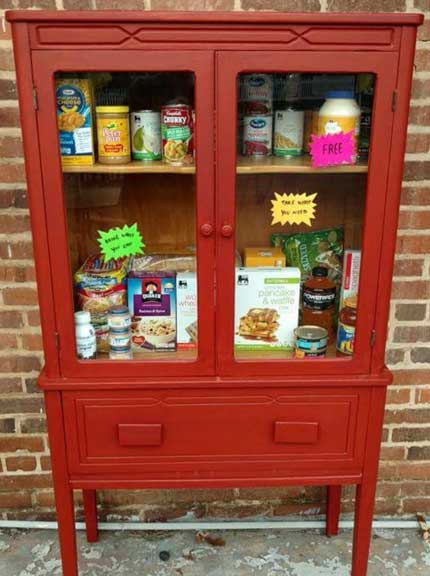 A community food pantry has opened in the town of Keysville to provide area residents in need of food support.

The food pantry is located directly in front of the Tea Room, a live music venue at 150 King St.

“After seeing some examples of other pantries on Facebook, we thought there may be a need for a pantry like this in Keysville,” Tea Room owner Paul Robleto said.

The most recent study from the Federation of Virginia Food Banks said more than 912,790 Virginians do not know where their next meal will come from. Furthermore, there is a 15.3 percent poverty rate for individuals living in the South. This proves to be the highest poverty rate for families in rural areas, according to the federation’s statistics.

“Because of the generosity of the townspeople, this little piece of furniture is actually feeding people in need,” Robleto said.

“We put it out there with a little sign that says, ‘take what you need and bring what you can,’” said Robleto. “Within 24 hours, food had gone out of it and some food came in to it.”

Robleto said this communicated to him there was a need for the pantry in the area. In addition, he said other community members were willing to help their neighbors.

The study said the average meal costs $2.68, however an additional nearly $407 million would be needed in order to bridge the hunger gap within the state.

Robleto said the Community Pantry Box is located outside and available for use 24 hours a day.