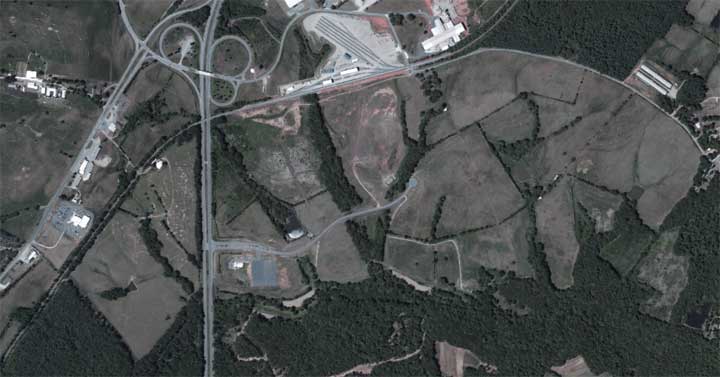 Since then, only one tenant is confirmed to call the park home, the Virginia Growth Alliance (VGA), made up of the same counties, plus Brunswick, Greensville, Mecklenburg and Nottoway, as well as the city of Emporia.

“As far as I know, I am the only tenant,” VGA Executive Director Jeffrey Reed said in an email from Europe where he was on vacation.

From his office in the park, Reed operates the alliance’s daily business, helping market its clients’ sites, including Heartland, but has no real relationship with the authority other than as tenant.

“B2X Online Inc. will begin leasing a portion of the building in November,” Clark said. “Also, in November 2015, property at the Heartland Business Park was sold to Forest Pro Inc., which is in the process of getting DEQ (Virginia Department of Environmental Quality) approval to begin construction of a building.”

According to its website, Forest Pro is a new and used logging equipment dealer.

Heartland Regional Industrial Park is nearly 773 acres in size with 402 of those acres being suitable for construction, according to a park fact sheet. A Sept. 2001 land use concept sketch plan shows approximately 30 potential lots. Norfolk & Southern Railroad borders the northern edge of the park — with a short rail line entering the park — as does Horseshoe Bend Road. The largest lot is 260 contiguous acres in size. A 36-acre lot has a 10-acre graded pad for an up to 150,000-square-foot facility.

There are also Job Creation Grants (JCG) of up to $500 or $800 per year per net new permanent full-time position earning, respectively, at least 175 percent or 200 percent of the federal minimum wage. The Virginia Enterprise Zone designation expires Dec. 31, 2019.

Another plus is Heartland being part of Virginia’s Gigapark network. The network offers connectivity to more than 1,500 miles of fiber optics for bandwidths up to 10 gigabytes. According to the official Gigapark website, the network includes several sites in the five counties around Farmville and connects further up interstates to Northern Virginia and south through North and South Carolina and Georgia to Atlanta.

In recent months, each of the authority’s members, including Charlotte County, has considered signing an amendment to the ordinance creating the authority and park. In a memorandum to the Prince Edward Board of Supervisors ahead of its Aug. 9 meeting, County Administrator Wade Barlett noted the following:

“The Authority was created by ordinance in November of 2000 for the purpose of supporting regional economic development efforts. The Authority owns the regional industrial park located on Rt. 360 in Charlotte County.”

And yet, each of the administrators who responded to the Gazette’s inquiries, including Clark, indicated their counties have not and do not contribute to the park financially. Bartlett’s memorandum was attached to a copy of the original Nov. 15, 2000, ordinance, which noted initial funding for the park came from a $1.375 million grant through the Virginia Industrial Site Development Fund (VIDF) and another $1.375 million from the Virginia Tobacco Commission for a total $2.75 million investment.

In part, the original ordinance states, “Member Localities … shall provide for revenue and economic growth-sharing arrangements with respect to tax revenue and other income and revenue generated by any facility owned by the authority…. Funding of the Authority shall be by appropriation as decided from time-to-time by the Governing Bodies of the Member Localities and from such other sources as are identified in the Agreement.”

The ordinance specifies that among the reports the authority must generate are annual fiscal year audits.

Charlotte County Finance Director Norma T. Tuck provided The Gazette with copies of every audit since the authority and park’s inception, including one for the fiscal year (FY) ending June 30, 2015.

As of that date, the authority held total assets of $3.939 million.

The authority earned $4,023 in rent, presumably from the VGA, and $400 in interest and investment income. It spent $22,087 in professional fees, park maintenance, insurance, electricity and other utilities. Having started the fiscal year with approximately $3.957, it experienced a $17,664 change in net position.

According to previous audits, the highest combination of cash, investments and other assets came at the beginning of the 2007 fiscal year at $4.47 million. With FY 2015’s bottom line at $3.939 million, the authority has lost approximately $531,000 in nine years.

The biggest part of the ordinance amendment authority members began considering in August is to remove term limits for the county representatives who sit on its board. These include each of the county’s administrators and a member of their boards of supervisors.

In September, a number of people speaking at the Charlotte County Board of Supervisor’s meeting were critical of Clark’s and Supervisor Gary Walker’s work on the authority’s board. Citizens complained about authority board minutes being in “disarray,” there were “missing” bylaws and evidence of Heartland’s affairs being “handled in a negligent manner.”

While Tuck provided the authority’s audits to The Gazette at Clark’s direction, citizens at the September meeting asked why the authority hadn’t produced reports on activities, accomplishments, tenants and sales.

In response, Walker said, “Most of you are aware of this, but I will say it to the public. When the Heartland Authority was initially built, and the park was bought and established, we had a paid executive director, a paid staff to handle all this information that people are really interested in.”

He said the 2008 recession forced the authority to lay off that staff and rely on volunteers from each county. Since then, Walker said, the authority only met as needed. As of August, he claimed, the authority hadn’t met in more than a year.

In June, the Commonwealth Transportation Board approved a $790,000 project to build an entrance on the park’s western side. Transportation board members stated there would be “benefits of improved travel time and accessibility as well as the amount of land potentially impacted.”

However, in a Sept. 21 guest column, Wylliesburg resident Kay Pierantoni, was critical of the grant’s purpose, noting Forest Pro purchased land on the, opposite, east side of Kings Highway, where the entrance to VGA already exists.

Among a number of other complaints, Pierantoni said that while the authority claimed Heartland was only worth $3.8 million, she claimed there has actually been closer to $12-$14 million invested.

She also said nearly $300,000 of the $790,000 for the west entrance project is for further land acquisition and asked, “Anybody wonder what that’s about?”

Heartland for ‘the future’

Clark did not respond to a question asking if Charlotte County felt it was still good to be part of the Heartland project.

Buckingham County Administrator Rebecca S. Carter said she and County Board Supervisor Harry Bryant have served on the authority’s board “to demonstrate a regional collaboration in order for Heartland to tap into some regional grants.”

Carter also added, “At first, it was perceived that only industries that are too large for our local industrial parks would be marketed in the Heartland park,” but did not explain further except to suggest seeking out Reed for more information about marketing the park.

Bartlett, who sits on the authority board, said the park provides tracts of larger land with appropriate zoning than are available in Prince Edward County.

“When a company locates there, it will provide jobs for which our citizens can apply,” Bartlett said.

In response to criticism of Heartland’s 16-year-long wait to bloom, he said industrial parks like this are long-term investments that, in the long run, will provide substantial benefits and jobs.

“These benefits (and) jobs are often for future generations,” he said, adding this is not the first time he’s waited to see the results of a similar project. “The Heartland park reminds me of the county’s business park. The board of supervisors (was) criticized for buying that property. It took many years for any business to locate in it, but there are (more than) 400 jobs in that park and millions of dollars of investment and the county has more than recouped its investment.”

Bartlett said he is unaware of any conversation to consider pulling out of the authority.