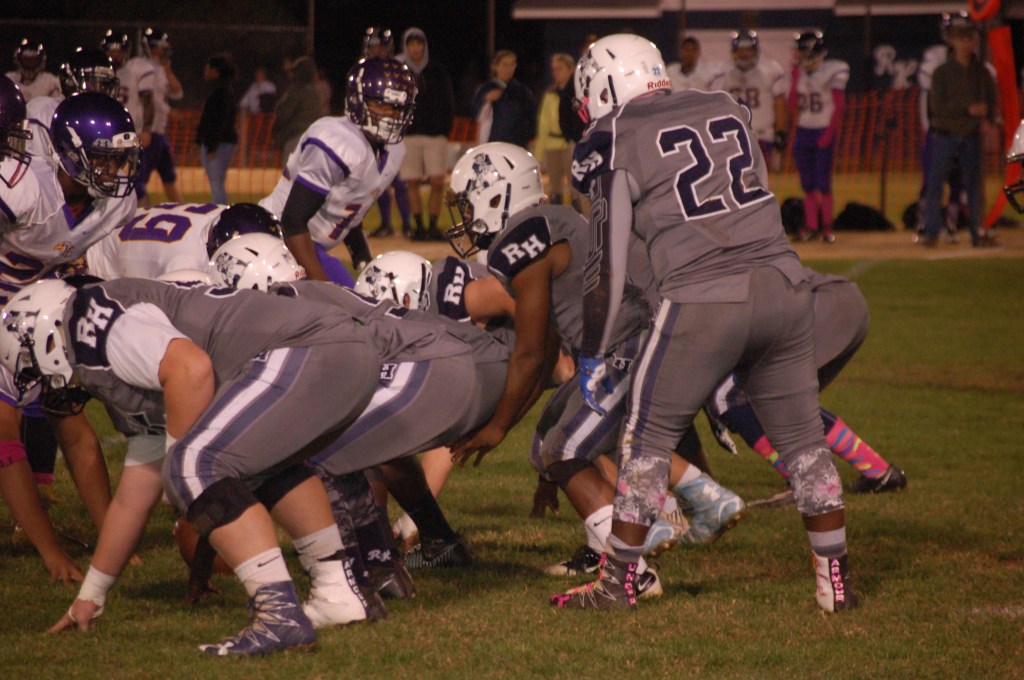 Photo by Titus Mohler | Randolph-Henry High School senior quarterback Chris Powell prepares to accept the hike and junior running back Tyrie Blow-Tydings, No. 22, stands close by, preparing to help Powell and the line push for a first down against visiting Prince Edward County High School during Friday night’s homecoming game.

For a few thrilling moments it looked as though Randolph-Henry High School’s varsity football team was going to pull off an epic comeback victory in front of its large homecoming crowd Friday night.

But the visiting Prince Edward County High School Eagles, who twice led by 19 points, ended up playing the role of spoiler, scoring with 16.5 seconds left and holding on for a 45-40 win.

For Statesmen Head Coach Mark McPherson, the loss did not overshadow the impressive effort of his team.

“I told the guys, this is my 18th game here, and I’m as proud of them tonight as I have been the whole time because we fought back,” he said.

He noted his squad had players out with injuries, and though Randolph-Henry had gotten senior playmaker Fred Blow-Tydings back Friday, he went down again with an injury in the second half after having been an impact player in the game.

The Statesmen became more limited in what they could on offense, “but we executed very well and did some good things with it, and kids continued to fight,” McPherson said. 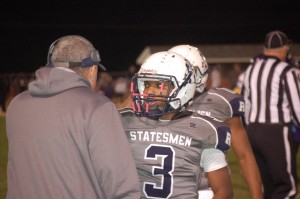 After falling behind 12-0 with 10:08 remaining in the first half, Randolph-Henry used its next drive to cut the lead in half, set up by a good kickoff return from senior Chris Powell and a Prince Edward facemask penalty that put the Statesmen on the Eagles 36-yard line.

Runs by Fred Blow-Tydings and Powell, plus a Prince Edward penalty, were the prelude to a 5-yard touchdown run by junior Tyrie Blow-Tydings with 6:51 left in the half.

During their next possession, the Statesmen turned the ball over on downs. Prince Edward, benefiting from more strong passing by Thomas, scored again when he completed a 13-yard touchdown pass to sophomore Rah’Quan Payne with 1:15 left before halftime.

The Eagles led 25-6 at halftime, but Randolph-Henry cut into that advantage in its first drive of the second half. Strong running by senior Harmon Boyd set up a 5-yard touchdown run by Tyrie Blow-Tydings, and Fred Blow-Tydings completed a pass to Powell for the 2-point conversion to make the score 25-14 with 8:14 to go in the third quarter.

The Statesmen forced a punt by Prince Edward on its ensuing possession but then had trouble moving the ball on offense. On 4th-and-5, Randolph-Henry went for it. Fred Blow-Tydings hit Powell with a quick pass, and Powell scored a 40-yard touchdown to cut the Eagles lead to 25-20 with 4:09 remaining in the third.

But momentum immediately shifted back to Prince Edward on the kickoff, which Walker returned approximately 75 yards for a touchdown. Scott ran in the 2-point conversion, and the score was 33-20.

“I think the kickoff return was a major point in the game,” McPherson said. “And maybe that’s the difference in the game — a special teams play.”

The Statesmen could not respond on their next possession, and the Eagles got the ball back at Randolph-Henry’s 42-yard line, which is where Scott ran the ball in from for another touchdown with 1:20 left in the third. This built the Eagles lead to 39-20.

A strong kickoff return gave the Statesmen good field position at the Prince Edward 40-yard line. Tyrie Blow-Tydings took the ball from there and ran for a touchdown to make the score 39-26 with still 1:05 to go in the third.

The Eagles turned the ball over on downs. Randolph-Henry drove into Eagles territory via a 47-yard run by Powell. Runs by Boyd and Tyrie Blow-Tydings led to a 4-yard touchdown run by Powell. The 2-point conversion attempt failed, but the Statesmen were within seven, 39-32 with 7:15 left in the game.

Directly after this, Randolph-Henry appeared to have recovered an onside kick, but the call was reversed. 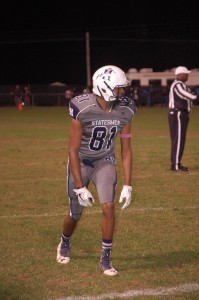 Nevertheless, the Statesmen forced a punt. A run by Tyrie Blow-Tydings gave them a first down in Prince Edward territory at the 42. Then Powell had a good run to the Eagles 35-yard line and a penalty against Prince Edward put the Statesmen on the 20.

Powell lofted a pass over the Eagles defense to senior Jonathan Randolph for a 20-yard touchdown, making the score 39-38 prior to the 2-point conversion attempt.

There was little-to-no thought of going for just an extra point.

McPherson said his regular holder on extra-point kicks was out for the game, and he had tried using a different one earlier in the game, and it did not work out.

“I think I’m also at the point of the season where I felt like we had an opportunity to win a ballgame, and I’m going to take it,” he said.

With the game hanging in the balance as they lined up for the 2-point conversion play, the Statesmen suffered a setback when they jumped offsides, pushing them back.

This forced McPherson to call a timeout and a different play.

The Statesmen went back out, Powell took the snap, had the option to pass but opted to run right and, with the help of some blockers, pushed his way into the end zone to give his team its first lead of the game, 40-39, with 1:30 left on the clock.

Prince Edwards’ Scott appeared to return the ensuing kickoff for a touchdown, but it was called back. The Eagles started their final drive with 1:24 remaining at the Statesmen 35-yard line.

Later, they moved to the Randolph-Henry 14 after a defensive pass interference call, which McPherson contested.

A couple plays after that, Thomas dropped back to pass, did not find his primary target and checked down to Scott, who was waiting on the left side. Scott caught the ball, drove forward and darted around a defender to score from 14 yards out with 16.5 seconds on the clock.

The 2-point conversion failed, leaving the score at 45-40.

The Statesmen still had time for another miracle. It appeared they might get it, too, when an approximately 30-yard pass from Powell to junior Trequan Agnew seemed to put them at around the Prince Edward 15-yard line with 4.8 seconds remaining, but the pass was ruled incomplete.

The final pass of the game fell incomplete on the next play as the clock hit zero, ending a wild back-and-forth homecoming contest.